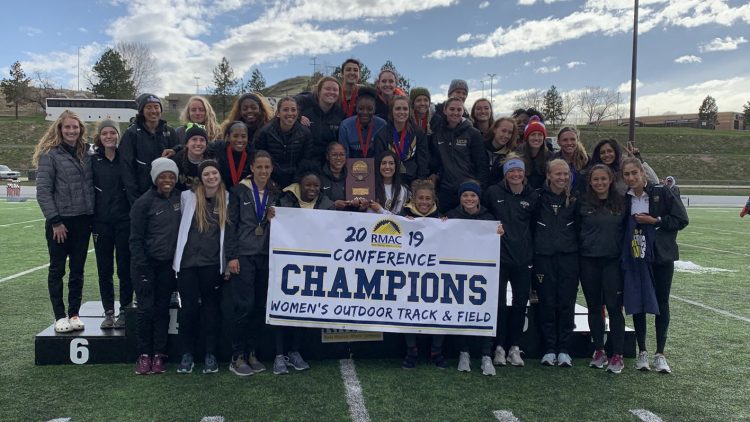 For the first time in program history, the UCCS women’s outdoor track and field program is the Rocky Mountain Athletic Conference champion. The UCCS men’s team climbed up the standings on the final day and claimed a second place finish. The teams combined for nine individual conference titles and 16 podium finishes.

The Mountain Lion women posted 161 team points in their championship run and cemented the first place spot with a 33.5 point cushion over second place Colorado School of Mines.

“It was an outstanding day and the women showed up with a vengeance,” Fellows said. “This was a great team effort. I have to give credit to our amazing coaching staff and support staff. The entire crew did an incredible job, and it’s a great day to be a Mountain Lion.”

Kaija Crowe scored 25 points with championships in the high jump and heptathlon, a runner-up performance in the 4×400-meter relay and a fourth-place finish in the long jump. She repeated as RMAC champion with 4,766 points on Friday and Saturday and finished first in four of the seven events. Crowe won the high jump with 5 feet, 4 1/4 inches, anchored the relay team that finish second in 3:53.03, and jumped 19-5 1/2 in the long jump. Her 27 points were the most for any Mountain Lion at the championships.

Heading into Sunday with the top preliminary times in the 1,500-meter run and 800-meter run, Skylyn Webb continued the pattern by winning RMAC championships in each event. Webb completed the women’s 1,500 in 4 minutes, 34.71 seconds, and finished the 800 in 2:15.55 for 20 points in the women’s point total.

Will Ross won his third overall triple jump championship and first in the outdoor season with 48-4 3/4, and used a personal-best 24-0 3/4 in the long jump for a runner-up performance. Dakota Abbott joined Ross on the podium in the triple jump with 47-6 1/4.

The championship is the first of the 2018-19 academic year for the Mountain Lion athletic department and the 24th in school history.