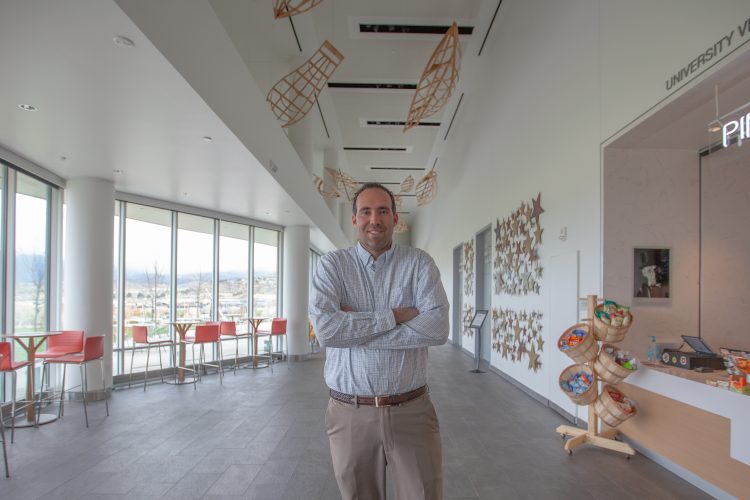 Editor’s Note: This is the fourth in a series of profiles of students who are graduating this semester.

Brad Johnson loved his job with Calcon Constructors, Inc., and was getting to manage some great projects. But the daily commute was killing him.

As he considered options, he spotted a job opening in facilities management at UCCS. He thought it would be similar to construction management and he could apply his experience to advance his career. He applied, got the job in November 2012 and hasn’t looked back.

Building and renovation projects on campus have been plentiful during his five plus years on staff, and Johnson has had a hand in many of them. In January 2015, he was named project manager for the Ent Center for the Arts.

“The Ent Center was a project that I never thought I’d have the opportunity to do,” he said. The Ent Center has five different venues including a gallery, recital hall, black box theater, student theater and 786-seat multi-purpose space. In addition, the building supports the academic Visual and Performing Arts program. “The acoustical separation requirements were a challenge to integrate into the building and to ensure that they were constructed in the way they were intended”, Johnson said.

“Working together as a team, there were about 80 consultants and over 700 construction workers – it was really an amazing experience.”

The 92,000-square-foot performing and visual arts complex opened in January, but Johnson continues to manage closeout on the project and the adjacent North Nevada Avenue infrastructure project, which includes parking lots, a round-about, landscaping, irrigation and site furnishings on the 28-acre site.

Much of that work was simultaneous with the Ent Center, meaning he was running two projects with separate teams and a lot of overlap at the site. That meant a lot of communication and coordination across projects. 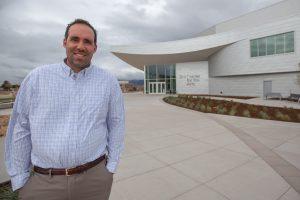 “I drive by it every day, thinking about the effort that our team put into the project, and the outcome we accomplished together.”

In 2013, before he took on those projects, Johnson began working on his master’s in public administration, taking one course each semester (including during summer). He will be among the nearly 1,600 graduates for all degree programs in the spring 2018 semester.

Not to mention that he also got married in 2012, and in 2015 he and his wife, Michelle, bought a fixer-upper that took a lot of weekend work over a couple of years. Meanwhile, their daughter, Elaina, was born in 2016.

“I may have taken on too much,” he said with a chuckle. “I am blessed to be able to go back to school and have a facilities management team that encouraged and supported these endeavors.”

Still, there’s another big project looming: the William J. Hybl Sports Medicine and Performance Center, which is expected to break ground this summer. It will be directly south of the Ent Center, and Johnson is the project manager. The building and site project is approximately $65 million, 104,000 square feet with a targeted substantial completion date of July 2020.

“At this time I really want to stay in the job that I have and apply the knowledge that I’ve gained in the courses that I’ve taken,” he said. “I can use the skills and tools that the MPA program offered and make a positive contribution to our facilities services department.”

Johnson said his favorite graduate course was policy making, and he wants to “apply the concepts of bottom-up policy making, evidence-based decision making and to be more actively involved with management of facilities”.

He says the degree program supplied him with more tools to use – and he expects to put those to work on the Hybl Sports Medicine and Performance Center.

“We’re trying to engage stakeholders early on in the project to make better informed and educated decisions as we move forward,” he said, noting that design and construction decisions could benefit from first knowing how the building will be managed.

As for the longer-term future, Johnson can’t imagine himself anywhere but at UCCS.

“I love this job and our facilities team,” he said. “I think our institution has a lot of potential. In the long term, maybe there could be another position here on campus, but right now I’m focused on working with our team to make our facilities department the best it can be.”

At any given time, he says, the department has more than 70 projects on its list – some in the planning stages, some awaiting funding, some under construction. It’s a busy place, and he doesn’t see the pace slowing in the near future.

He is, however, looking forward to graduating in May and perhaps having a bit more time with his family — “maybe taking a summer vacation.”