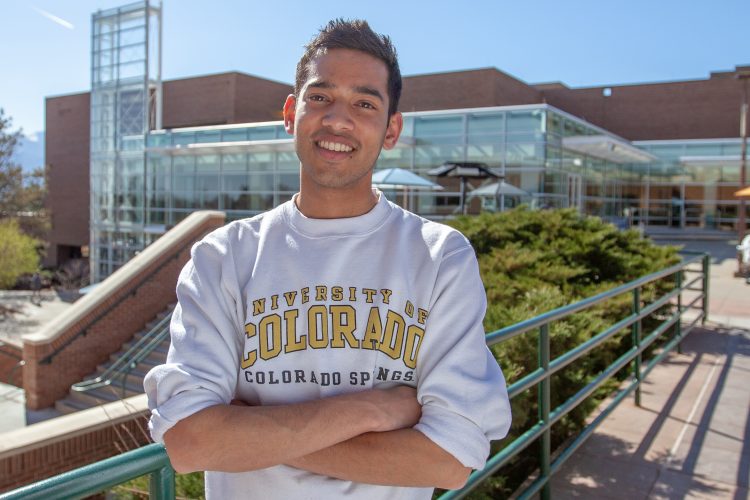 Editor’s Note: This is the first in a series of profiles of students who are graduating this semester.

Joey Vijayam is a huge advocate for being involved – while being flexible. That’s how he ended up being the student body president of the Student Government Association during his senior year at UCCS.

“I hadn’t even thought of that a year and half ago,” he said of his decision to run for the position in spring 2017. But the more involved he got on campus, the more appealing it sounded.

“Being part of student government gives me a chance to work with the administration, staff and other students, and I’m really glad that I did that. Really being connected on campus helped grow my love for UCCS.”

The 21-year-old biology major said he initially applied to UCCS because “it made sense from a financial and location standpoint.” He graduated from Pine Creek High School in north Colorado Springs.

He was a commuter student for the first couple of years and thought he might transfer elsewhere to finish up his undergraduate degree. But as he took classes, he realized that UCCS has a great pre-med program and ties to the CU School of Medicine. So he stayed – and moved on campus for his final two years. 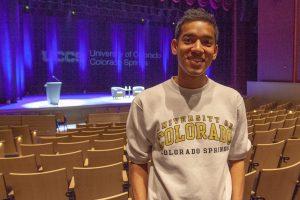 “I figured if I was going to graduate here, I was going to get the most out of it,” Vijayam said. He joined the Green Action Fund and the Asian Pacific Islander Student Union, and then got involved in student government.

The Student Government Association allocates thousands of dollars to clubs on campus and organizes and sponsors events. It raises money for the Student Relief Fund, which assists students who are ineligible for financial aid because of such things as immigration status. The organization also has worked hard on inclusiveness issues and helped develop a student creed, he says.

This spring, it launched an inclusive campus campaign that included a pledge signed by more than 4,000 students to promote diversity and inclusiveness. “We want free expression of thought, but in a respectful manner,” he said.

Vijayam said it would have been easy for his student government duties to consume all of his time, but he worked to maintain balance.

“Obviously, we have to put school first, and that’s been a challenge for me with student government,” he said. “I didn’t want to be a student who just had an idea or dreamed about something – I wanted to do it.”

He said UCCS staff is supportive of students who want to pursue new ideas or programs. For example, he and a fellow student were encouraged to develop an idea they had into a problem-solving course for the Gateway Program Seminar, a fall semester class for all freshmen. That, he said was a particularly rewarding experience.

“That’s one of favorite things about UCCS – that there are always teachers and higher ups who are willing to take a risk on us,” he said.

His coursework also got him thinking about new possibilities for his future. Initially, he thought he’d go to medical school. That’s still a possibility, but Vijayam developed an interest in public health – and the many avenues to pursue a career in that field.

He plans to refine his goals over the next year, applying for graduate school in public health or medical school – definitely something in the medical field.

“It would be cool to develop public health programs in rural communities and slum communities around the world,” he said. “I’m thinking pretty globally.”

Born and raised in India, he moved to Colorado Springs with his family when he was 10. While he most understands poverty in India, he says he’s keeping his option of where he might focus open.

“I’m going to study for the medical exam and look at enrolling in fall 2019,” he said. “In the meantime, I plan to stay in Colorado Springs. I’m taking things one step at a time.”