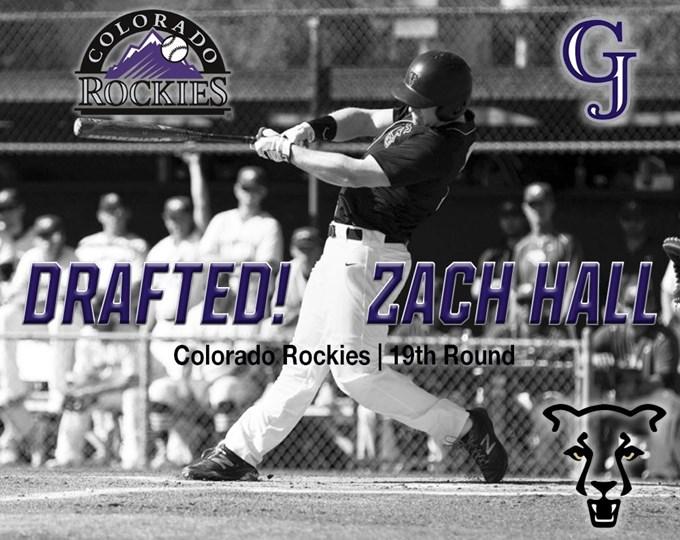 The Colorado Rockies drafted UCCS senior outfielder Zach Hall June 6 in the 19th round of the 2018 Major League Baseball draft. He was the first outfielder selected by the Rockies.

“This is a huge day for UCCS and our baseball program,” said Dave Hajek, head baseball coach. “Zach has been one of our team leaders from day one in our new program. He has been a huge part of getting our team on the RMAC map. Congrats to Zach and his family on this opportunity.”

Hall will begin his professional career with the Grand Junction Rockies of the Pioneer League. His first game for the Rockies will be played on the same field where he played his final college game. The Rockies will open their season June 15 at Suplizio Field against the Orem Owlz. Hall’s final game for UCCS occurred May 11 in a Rocky Mountain Athletic Conference Baseball Tournament elimination game against Colorado Mesa University, when he otherwise would have participated in the spring commencement ceremony. He earned his bachelor’s degree in communication.

A 2018 D2CCCA All-American and National Collegiate Baseball Writers Association All-South Central Second Team selection, Hall also earned All-RMAC First Team, RMAC Gold Glove and the RMAC All-Academic First Team honors. He closed his senior campaign batting .317 with a .711 slugging percentage and a .406 on-base percentage. Hall ranked second in the conference in runs batted in (60) and home runs (20), and third in runs scored (58) and total bases (128). Hall recorded at least one hit in 37 games, including 17 multiple hit games. Defensively, he recorded 67 putouts and assisted on five as part of his .973 fielding percentage.

Hall is the first Mountain Lion in program history to be drafted into MLB.

–By Sarah Meier, Athletics. This story originally appeared at GoMountainLions.com.