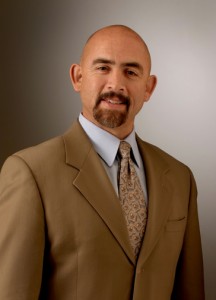 State colleges and universities are community economic drivers that deserve to be supported, Colorado Lieutenant Governor Joe Garcia told a group of business and community leaders meeting on campus March 11.

Garcia, who also serves as the executive director of the Colorado Department of Higher Education and provides education policy analysis to Gov. John Hickenlooper, spoke on campus in an event sponsored by the Colorado Springs Economic Development Corporation. Most in attendance were local business and community leaders.

Garcia previously held positions as president of Colorado State University-Pueblo and president of Pikes Peak Community College and knew many in the audience. The following day, he served as grand marshal of the Colorado Springs St. Patrick’s Day Parade.

“What is it that we have in this state? Are we serving our students?” Garcia asked. “We are fortunate here in Colorado. We have one of the most highly educated adult populations in the country if you look just the percentage of the adult population in this state with a college degree. But we’re dreadfully low — we’re in the bottom half – when it comes to sending our own kids on to higher education. And we’re losing ground all the time.”

Intermixed with personal stories, Garcia stressed that education provides both individual and collective benefit. He was raised in northern New Mexico and earned a bachelor’s degree from CU Boulder and a law degree at Harvard University and previously served in the administration of Colorado Governor Roy Romer.

Garcia traced the decline of funding for higher education from $706 million three years ago to the latest recommendation of $519 million to the Joint Budget Committee of the General Assembly as indication that Colorado higher education is efficient in it operation and should not be cut further.