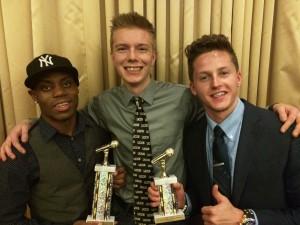 A UCCS student was awarded top honors last week for a radio interview he did for the UCCS Radio internet station.

“It’s really cool,” Ben Sloan, senior media specialist, Media Services, and staff adviser to UCCS Radio, said of the national recognition. “We started as a small unknown entity. Now our campus gets to be known as having award-winning radio.”

Sloan traveled to New York with three UCCS students earlier this month for the annual Intercollegiate Broadcast System conference and awards ceremony. IBS is an association for high school and college radio and community stations and webcasters. Sloan also taught a session about audio recording at the conference.

Kyle Boyle, a UCCS sophomore and station student manager, also traveled to the conference. He said he hopes the national recognition sends a message to other students that they can participate in UCCS Radio.