The stats are in and UCCS saw an increase in thefts and drug related violations, as well as a decrease in alcohol arrests during the 2014–2015 academic year. 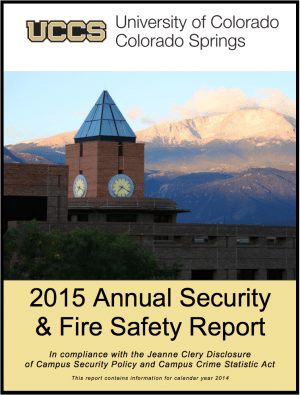 According to the 2015 Annual Security Report & Fire Safety Report, the number of reported thefts and drug related offenses all saw a slight uptick from previous years, while alcohol violations decreased.

During the 2014–2015 academic year, a total of 61 cases of theft were reported on campus, up from 55 the year before. Drug related arrests also saw an increased from 38 to 64, while alcohol violations decreased from 36 to 24.

Brian McPike, police chief, Department of Public Safety, attributed the increases to a shift in the departments jurisdiction under the Inter-Governmental Agreement maintained with the Colorado Springs Police Department, and continual campus growth.

“Housing saw an additional number of on-campus residents, which may have been a reason for the uptick in contacts with our police officers. Additionally, the Inter-Governmental Agreement that we maintain with the Colorado Springs Police Department expanded, which means our officers came in contact with students in new areas surrounding the campus that had not previously fallen within the original IGA,” McPike said.

The increase in thefts have been crimes of opportunity that often involve purses being taken from unlocked cars, or laptops left unattended in the library.

“When students, staff or faculty leave their belongings alone, it unfortunately becomes an opportunity for a theft to occur,” McPike said. “We do our best to prevent these types of opportunity crimes by having officers complete foot patrols around all of our buildings and residential housing, as a visual deterrent, but we ask that if anyone sees someone acting suspicious, casing an area, or looking into vehicles in a parking lot, that they please call our University Police Dispatch Center and we will send a police officer to that area to investigate.”

The University Police Dispatch Center can be reached at 255-3111. Campus members can also make an anonymous report at the following link: http://www.uccs.edu/pusafety/police/reportacrime.html.

The Annual Security Report is issued annually on Oct. 1, and made available to students and university employees in compliance to the Clery Act and the U.S. Department of Education regulations.

The full 2015 Annual Security Report & Fire Safety Report can be viewed at: http://www.uccs.edu/asr/.