While most may recognize him from nearly 100 film and television roles, Sam Waterston’s work as a Shakespearean actor was the featured topic in a special Prologue series event for UCCS theater students March 23. He shared his story as an actor on the set of the student production of “Art of Dining” in the Dusty Loo Bon Vivant Theater at the Ent Center for the Arts.

A 50-year veteran with nominations for every major acting award, Waterston shared the serious and funny moments of his career and answered questions for an hour. A group of 13 theater students worked with him the following morning on the technique and philosophy for performing Shakespeare. 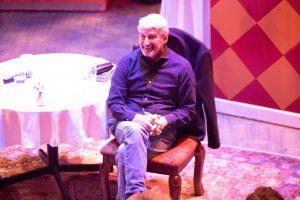 “I put (Shakespeare) on a giant pedestal for a very long time, and that’s a grave mistake,” Waterston said. “There’s work involved for Shakespeare that there isn’t with contemporary works. He’s a really good writer. But if you think that your feelings compared to Shakespeare are this to this (gesturing his hands to two different heights), then you’re in trouble. And it’s not Shakespeare that’s the problem. It’s the respect for the power of your own feelings.”

Waterston shared his struggles as an actor early in his career, and his plans to move to Los Angeles to focus on film and television before his agent found the roles of both Laertes in “Hamlet” and Benedick in “Much Ado About Nothing” in 1972. When asked his most memorable Shakespeare role, he listed his 2011 performance as Lear in “King Lear,” when he “lost it” on stage performing the emotionally-demanding role.

“The parts that are fun to play are the ones that are really tough,” Waterston told the students. “You want things to be just beyond your reach. Otherwise, why go?”

Kevin Landis, associate professor and director of the theatre and dance program, moved the conversation to his film and television career, and how his stage training helped. Waterston said the different formats were essentially the same for him as an actor. On the stage, he’s performing the same material each night, and on camera, the same scene requires multiple takes to capture.

Waterston illustrated the concept with his experience playing Nick Carraway in the 1974 film “The Great Gatsby,” where the first scene he shot was him rowing a boat to a dock, tying it off and looking off into the distance. “On the 23rd take, I thought, ‘I like the movies.’ I was having a really good time doing it a little bit better.”

He said it was the same for the stage. “You have a night after the performance to regret what you did, but then you have another chance the next night to do it again.”

A student asked about his career in theater before moving into film and television. “I thought my life was going to be in the live theater. My father thought the movies were amusing, but he wouldn’t have a television in the house. He thought the theater was cool. So I inherited a lot of those feelings.”

Waterson won the 1993 Golden Globe Award for Best Actor in a Television Drama Series for “I’ll Fly Away,” the 1996 Primetime Emmy Award for Outstanding Informational Series in “Lost Civilizations,” and a 1999 SAG Award for Outstanding Performance by a Male Actor in a Drama Series for “Law & Order.” He was nominated for the 1985 Academy Award for Best Actor in “The Killing Fields.” Waterston received a star on the Hollywood Walk of Fame in 2010.

Prologue was founded and is produced by Associate Professor Kevin Landis. It is curated by Landis, and the VAPA and Theatreworks staffs. The program is administered by Jeremy Click and funded by the support from the Chancellor’s Office, The Dean’s Office, VAPA, Theatreworks and the continuing patronage of the community.