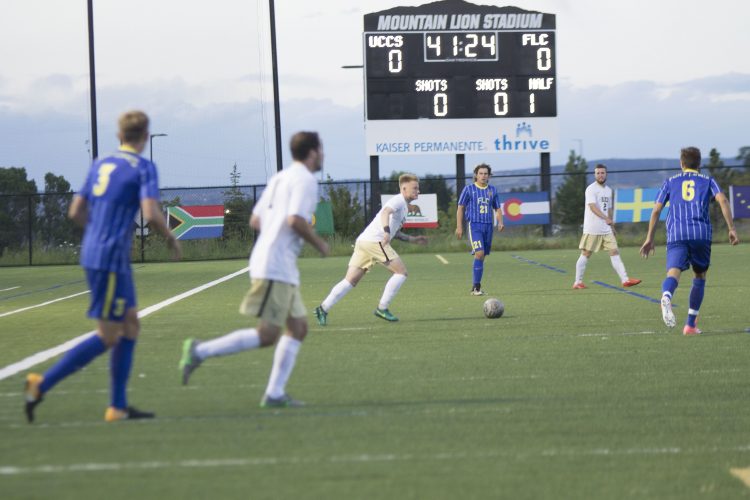 After a year of using a back-up scoreboard intended for indoor use during out-in-the-elements soccer and lacrosse games, UCCS teams and fans are enjoying new state-of-the-art scoreboards at Mountain Lion Stadium.

The new boards, manufactured by Daktronics, were installed late this summer. Their first use came Aug. 17 at an exhibition men’s soccer game.

A multi-year gift from Kaiser Permanente paid for the new boards. They replace two boards installed in 2005 and the temporary back-up board in use for the past year. The old boards were unreliable.

“The new scoreboards mark a major, noticeable upgrade at Mountain Lion Stadium,” Nathan Gibson, executive director, Athletic Department, said. “Daktronics is widely regarded as the leader in scoreboard technology, and the Kaiser Permanente gift allowed us to purchase boards that we expect to handle all of our needs well into the future.”

The boards feature customizable captions for team names, and the flexibility for full compliance with college soccer and lacrosse, and high school football. The system also provides integration for broadcasts with data feeds in each sport.

The scoreboards were installed on the north and south ends of the field, making it the only soccer and lacrosse facility in the Rocky Mountain Athletic Conference with two displays. Multiple displays allow student-athletes and coaches to quickly see the game time and score.

The boards continue a series of improvements in the last two years at Mountain Lion Stadium. New ball control nets were installed after the 2015 season and a new playing surface was installed in summer 2016. Press box improvements and a new storage area took place this summer.