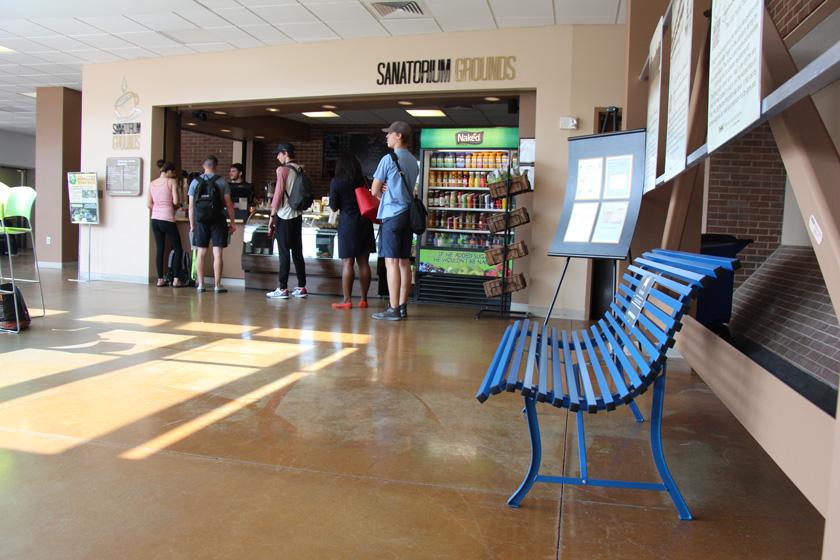 Earlier this summer, Tom Dewar, senior director, Development Office, received a phone call from a donor who said, “I bought you a bench.”

Just weeks later, Dewar watched as UCCS installed a blue bench near Sanatorium Grounds in the University Center,  a gift from Alex and Mary-Katherine (MK) Fleming and a symbol of a campaign to stop sexual violence. The Flemings live in Denver and are the parents of three children, with a fourth on the way. Alex is a consultant for Ernst & Young and a veteran who struggled with PTSD.  MK is a running coach and a survivor of sexual assault that occurred on a college campus.

The bench is a part of an installation for the Blue Bench Campaign which aims to put an end to sexual assault through prevention and care such as educational curriculum, self-defense classes, counseling services, a support hotline, and more. The organization was founded in 1983 as the Rape Assistance and Awareness Program.

The organization also spreads its message by placing blue benches around the Denver-metro area, which are donated by community partners. Each blue bench displays information about accessing services from the organization and supports the mission of creating safe places for the community and survivors alike 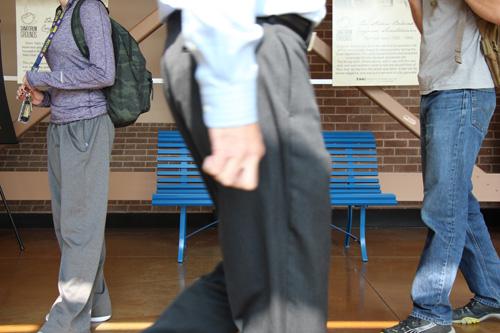 The blue bench is the first of its kind in Colorado Springs and is the sole mobile blue bench. Mobility allows it to move around campus and be a visible sign for advocacy. A plaque on the bench will include the campaign’s contact information as well as UCCS contacts for campus resources.

Donating the blue bench to the campus resonated with the Flemings on multiple levels. Their main focus was to have the bench act as a physical object that will put the conversation about sexual assault into people’s minds, which can then produce more open and constructive conversations about the topic. Having been personally affected by sexual assault, the pair wanted to help be a part of the transformation and spread of advocacy for the topic in mainstream communities such as college campuses.

In a written statement, the Flemings said their focus on campus communities was due to the fact that “college campuses remain the place where most young people come to face sexual violence directly or indirectly for the first time, and the experiences and support they receive in those situations can define who they are as a person for the rest of their lives.”

“We are proud to help build mechanisms (such as the Blue Bench) that are tools for victims that didn’t exist when we were younger,”  Alex Fleming said. “UCCS is a unique place in its support for veterans and their transitions, and we are proud to support the school as the only location for one of our benches outside of Denver.”

Dewar said he hopes the bench helps students know that “they are not alone, there are resources on campus and the university is a support system.”

To learn more about the campaign,  visit http://thebluebench.org/