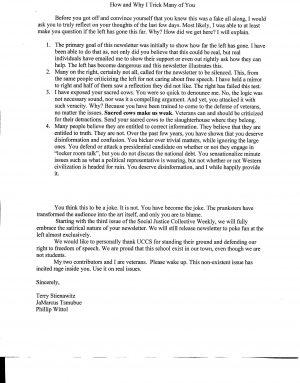 Three purported military veterans not associated with UCCS claimed responsibility for a flyer that presented anti-veteran sentiments and ignited emotions locally and across the nation.

Three people, using the names of Terry Steinawitz, JaMarcus Tsmubue and Phillip Witol, delivered a new flyer “How and Why I Trick Many of You” to the University Center Aug. 31, asking that it be posted on community bulletin boards in accordance with university policy. UCCS does not approve of the content of flyers on bulletin boards, regulating them only for size and time posted.

The three veterans who said they authored the Social Justice Collective Weekly flyer say they intended an initial Aug. 24 edition suggesting veterans didn’t belong at four-year colleges as satire and test of the university’s support for the First Amendment.

“We would like to personally thank UCCS for standing their ground and defending our right to freedom of speech,” the veterans wrote. “We are proud that this school exist in our town, even though we are not students. My two contributors and I are veterans. Please wake up. This non-existent issue has incited rage inside you. Use it on real issues.”

Chancellor Venkat Reddy said he was proud of UCCS students, faculty and staff.

“Thank you for standing by the First Amendment and freedom of speech,” Reddy said. “I am grateful for all the positive comments I received, especially from veterans. I want to reinforce that the freedoms we enjoy today are because of our veterans.”

The Aug. 24 flyer generated coverage from local traditional media outlets as well from social media sites and websites. More than 100 people called UCCS expressing frustration with the flyer and mistakenly believing its content or that UCCS supported it. Others sent email and thousands took to social media to express their opinions.

A few hours after its posting, Reddy issued a statement condemning the Aug. 24 flyer. He also attended an Aug. 30 campus forum organized by student veterans. He directly addressed the students, thanking veterans for their service and defense of the U.S. Constitution and assuring them that UCCS will always support them.

Reed, a 27-year U.S. Army veteran, encouraged the veterans in the room to confront stereotypes and to recognize that some behavior observed in military units can be viewed as inappropriate in other contexts.

“Stereotypes break down at the individual level,” Reed said. “It’s important that we get to know each other well enough that we understand both our differences and our similarities.”

3 Comments on Group claims responsibility for offensive veteran flyer: ‘You have become the joke’