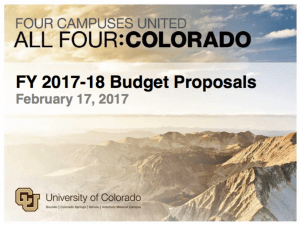 CU administration has put forward a proposed 2017-18 budget that includes tuition and fee increases between 3.14 percent and 4.91 percent, as well as a systemwide employee merit pool of 2.5 percent.

The Board of Regents began reviewing budget details during the board’s meeting Feb. 17 at CU Boulder. The board could vote on a budget as early as its next regular meeting, April 6-7 at CU Denver, after the state’s Joint Budget Committee has proposed the state budget.

The presentation to the board by Todd Saliman, vice president and chief financial officer, said the suggested budget takes into account the modest state funding increase as currently proposed by Gov. Hickenlooper and projected enrollment growth. The board also considers budget possibilities should state funding remain flat or decrease.

“If the Legislature for some reason were not able to fund the governor’s budget request … the impacts are real,” Saliman said. Reduced state funding would mean less for deferred maintenance and likely would affect tuition rates. Targeted cuts would be possible, too.

The 2.5 percent merit pool for compensation is consistent with the governor’s budget request.

Most of the board discussion focused on CU Denver, which last year saw a revenue shortfall. Chancellor Dorothy Horrell spoke at length about her proposal for a new strategic investment in the campus – an additional $5 million annually for the next decade – as part of an effort to “establish CU Denver as a leading urban public research university.”

Members of the board expressed guarded support.

“If you go back 10 years, CU Denver was not a research institution … and now it’s trying to become something it hasn’t historically been,” said Regent Kyle Hybl, R-Colorado Springs, who urged caution in case the goal proves unfeasible.

Regent Linda Shoemaker, D-Boulder, said she would support such an investment.

“I feel like (CU Denver) has been sort of a stepchild among the campuses,” Shoemaker said. “I do believe you guys are going to make good decisions about where that money goes.”

Horrell said for CU Denver not to establish itself as a premier public research university “would be an abdication of the responsibilities we have.”

“Nothing has come easy for CU Denver,” Horrell said. “It has been incredibly tenacious and resourceful in being able to do what it has done. … I absolutely feel this is the right thing to do.”

“I think now we’ve got the right people and we’re going to make it work,” Benson said.

— This article originally appeared in the Feb. 23 edition of CU Connections.