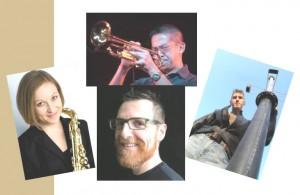 “We wish to celebrate the relatively short history of the VAPA Music Program at UCCS, the dynamic directions and creative shape music is taking on this campus, artists and composers who have visited us in the past, and perhaps most exciting, a promising future with a beautiful Ent Center for the Arts just over the horizon.”

The group will perform new works written in honor of the UCCS 50th anniversary including a world premiere commissioned for this event, “Ecoacoustic Concerto (Eagle Rock) for Two Trumpets, Ensemble and Sonic Geography,” by award winning composer Matthew Burtner of the University of Virginia. The work was commissioned for this festival and written for Whitehead and Cuong Vu. This piece will feature soundscapes recorded in the environment of the Heller Center for Arts & Humanities. Burtner visits UCCS each summer to co-teach sonic landscapes, an innovative cross-disciplinary course between music, geography and humanities with Whitehead and Brandon Vogt, assistant professor, Department of Geography and Environmental Studies. Additionally, Whitehead will unveil a new campus theme song.

For more information about the festival, contact Colin McAlister, lecturer, Department of Visual and Performing Arts, (719) 255-5134.