Tatiana Bailey’s multiple interviews with city and regional leaders provided the foundation of her annual report during the 23rd UCCS Economic Forum Oct. 10 at the Ent Center for the Arts.

In addition to her reporting of trends and metrics, which shows Colorado Springs to be ahead of or in line with national and state trends, she focused her presentation on the region’s opportunities and challenges.

“Economists are usually descriptive people, not prescriptive people. We just tell you what the data is showing,” Bailey said. “I decided to interpret some of the data the way that I see it, but more importantly, I talked to a lot of people in the community. I had dozens of meetings with individuals who were all very willing to talk to me about what they see as the major challenges and opportunities.”

Bailey said the challenge locally isn’t because of lack of opportunity, but instead it’s needing to accommodate growth. She focused her comments on what the next 5-10 years will look like.

Workforce
Colorado Springs has shortages in some key areas, and wages are typically lower locally for the same jobs in other cities. The local demand for jobs is expected to be greater than the supply through 2025, and the pipeline to create employees in those jobs will be a struggle. Colorado’s low spending for both K-12 and higher education makes it difficult to generate the needed workforce. 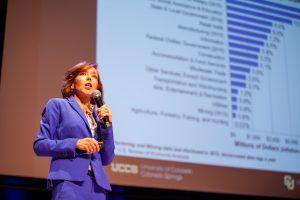 But the shortages are not contained to one skill level, instead they are spread out across the spectrum. Local colleges and universities are already investing in programs to build the pipeline to address some of the local need.

Demographics, Infrastructure and Sustainability
El Paso County is expected to continue its growth, with projections that the city could be larger than the city of Denver by 2022. The makeup of that growth, by people between the ages of 30 and 49, a high percentage of military veterans and a high percentage of people with higher education, make it attractive for business opportunities.

But the infrastructure that will be required to manage that population growth has been a challenge. Since 1990, the population of the state has grown 53 percent while lane miles has grown 2 percent. An economy that attracts a lot of tourists places additional strain on infrastructure. In her interviews, Bailey reported that everyone recognized that the funding is inadequate, but there are very different ways to address that funding challenge.

The region already does a good job of collaborating on projects, and the Front Range Passenger train concept appears to be gaining momentum with population growth and younger demographics that support it. The city’s 2C initiative has been a local solution for funding road needs.

For sustaining a growing population, leaders reported that they believe they have sufficient water for the next 30 years with conservation efforts. The city-managed Colorado Springs Utilities provides efficiencies that not all cities enjoy, and it does a good job of working with developers for building new infrastructure. The city is also taking advantage of new, cleaner forms of energy as prices have come down significantly. The city’s goal for 20% renewable energy by 2020 will likely be revised upward as the energy market changes.

Housing
Prices for new and existing homes, and apartment rents, have increased but are still lower than Denver’s housing options. But Bailey noted the gap between the two metropolitan areas has shrunk in the last 18 months.

But continued in-migration will continue to put pressure on housing prices, and zoning changes need to be made in order to accommodate the need for affordable housing. Some local builders have started to diversify their options by offering more lower-cost starter homes, and private philanthropy has stepped in to assist with the need.

Reconciling ideologies
Bailey reported from her interviews that geographically and politically, we are very spread out. It can make consensus difficult to obtain when addressing local and regional needs, but the interviews also highlighted the high spirit of collaboration. She reported that there is a lot of excitement and energy for the region, which carries into consumer and business confidence.

State and national forecast
Alison Felix, vice president of the Denver Federal Reserve, provided her insight into the state and national forecast. While there is some concern for the future, she reported the nation’s forecast remains strong, although some sectors have reported some slowing. Concerns of global factors have created some uncertainty among economists, although there is not consensus on if the United States is about to face an economic downturn.

Felix reported that Colorado’s economy continues to be strong, with the lowest statewide unemployment rate in nearly 20 years and job growth that is twice as fast as the rest of the nation.

The UCCS Economic Forum is the leading source of unbiased and rigorous information for the Pikes Peak region. Data is continuously updated and actively utilized in the community to inform and drive economic development and business decisions.