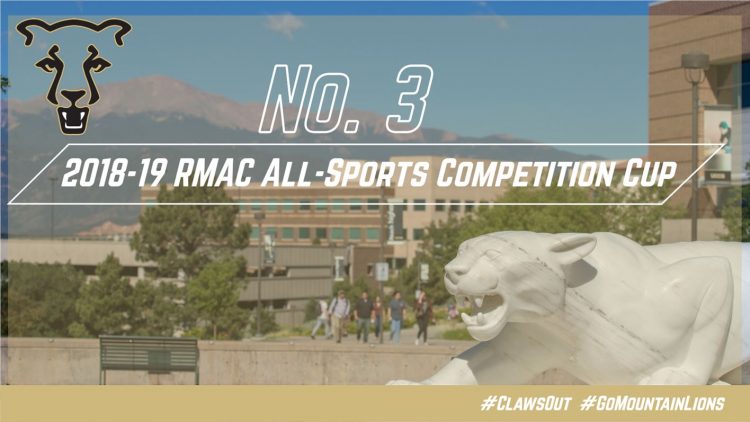 “The RMAC All-Sports Competition Cup is a great measuring stick for how the entire department is competing,” said Nathan Gibson, executive director of athletics. “I am pleased with the progress we have made in recent years and we have shown that we can compete with the very best in the conference. However, seeing the results is great motivation going into the 2019-20 season, knowing that we are close, but still realizing we have much work to do to close the gap if we aspire to win the All-Sports Competition. It is a goal of the UCCS Athletic Department to win the RMAC All-Sports Competition and I hope that finishing third for the past two years will motivate and inspire us to greater heights.”

The RMAC All-Sports Competition Cup is awarded to the institution that accumulates the most points over the year based on its teams’ outcome in the RMAC’s four core sports, along with six wild card sports. The four core sports are football or men’s soccer, men’s basketball, women’s basketball and volleyball, while the six wild card sports consist of three men’s sports and three women’s sports, which are designated by that institution’s best finish in those 18 non-core sports (22 total RMAC sports).

Total RMAC All-Sports Competition Cup points are calculated based on how the teams finish in the RMAC regular season standings. In the scenario where teams do not have regular season standings, conference championship results are used. If there is a tie, points are combined and divided by the number of teams involved in the tie. Point fractions were rounded up if above 0.5.

The core sports were led by men’s basketball with 69 points after finishing in a three-way tie for fifth place (17-12, 14-8 RMAC) in the regular season standings. Men’s soccer tallied 67 points from its fifth-place finish (10-6-3, 8-4-2 RMAC), followed by 63 points from the volleyball program that closed the regular season with a seventh-place finish (12-16, 10-8 RMAC). Women’s basketball wrapped up the core sports with 59.5 points after tying for sixth place with three other teams (13-15, 12-10 RMAC).