When Barbara Headle, senior instructor, History Department, and her students learned the Fairview Cemetery in Fountain had been the target of vandals, they reacted with anger. 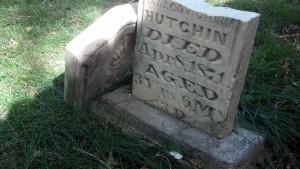 “What did she ever do to you?” Kim Sweetwood, a Colorado Springs senior history and anthropology major, asked about the damage done to three-year-old Ella Hutchin’s headstone.

Ella died April 8, 1871, and was one of the earliest burials at Fairview, her tombstone serving as a reminder of the harsh conditions often met by early settlers.

That anger soon was channeled into energy. Headle and Sweetwood joined forces with community leaders to create the Friends of Fountain Fairview Cemetery and the first-ever cemetery “crawl” scheduled for 10 a.m. – 2 p.m., Nov. 3 at 757 South Santa Fe Avenue, Fountain.

But this won’t be a Halloween-style creepy event. Instead, as many as 20 UCCS students volunteered to lead tours through the cemetery. At least six will dress in period clothing and give interpretations of those who are buried there based on their research. Proceeds from a $10 admission fee, and a silent auction of the students’ photographs taken as part of Headle’s summer 2012 history class, will be used to restore headstones and purchase security equipment.  The silent auction will be at the Fountain Library and will run concurrently with the cemetery tour; free refreshments are offered at the library.

For Headle, giving back to the cemetery was the right thing to do after city leaders willingly allowed a class of UCCS history and geography students to visit the cemetery this summer, to take pictures and map a portion of the cemetery. The students were learning a lesson in using headstones as primary sources and, as Headle says, “seeing what can happen when you get outside of the classroom and away from a computer.”

“They loved it, despite the heat and sweat; students got to know Fountain’s historical residents and see how the community developed.” Headle said.

Led by Mike Larkin instructor, Geography and Environmental studies,  students used geography methods to learn mapping techniques as well as how to identify various stone types. These methods help historians tell a more complete history of a community. They also researched the history of those buried at Fairview, many of whom were prominent settlers in the 1870s. Also  buried at Fairview are those who died in train wrecks or who were killed helping build the railroads that expanded access to the region.  Still others died as a result of epidemics such smallpox The cemetery began as a privately owned site and later was deeded to the City of Fountain.

“Cemeteries are really a microcosm of a community,” Sweetwood said. “From how a community’s aged, its poor, its children, and its deceased are treated, we can learn how a community felt about its members who might otherwise not have a ‘voice’ in the historical record, and even how the community embraced subjects such as race and religion.”

For Headle, the contrast between past and present is even more obvious.

“Fountain was named an ‘All America City’ in 2002,” she said. “But I can tell it was someplace special in the 19th century, too. By 2002, the town already had a diverse population residing in its cemetery, including an unknown pioneer woman and several families that go back four or five generations.”