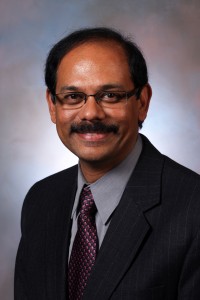 Venkat Reddy, dean, College of Business, was recently selected as one of 15 directors to form the new governing board of the Greater Colorado Springs Chamber of Commerce and the Colorado Springs Regional Economic Development Corporation.

The groups formally announced an agreement Dec. 15 to unify as one organization to be known as The Greater Colorado Springs Chamber and EDC, effective February 1, 2012.

The new board comprises five members from each of the Chamber and EDC boards and five at-large members. The chair of the new board will be appointed at its first official meeting after Feb. 1, 2012. The respective Chamber and EDC boards have directed the newly appointed board to serve prior to February 1, 2012, as the transition team planning the merger and effecting its implementation.

A search committee has been established to conduct a national search for the CEO of the new organization.  It is anticipated that the CEO will be in place within the next three to four months.  The search committee is co-chaired by Chamber board Chair Bill Hodgkins and EDC board Chair Doug Quimby.

While economic development and job creation will be at the forefront of the new organization, it is anticipated that the membership programs and services of both organizations will remain the same with any modifications or changes done so in concert with the investors and members.