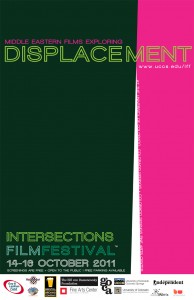 An opening reception for the 2011 Intersections Film Festival at UCCS is scheduled for 5 p.m. Oct. 14 at the Gallery of Contemporary Art.

The opening reception is the precursor for three days of foreign film screenings and discussions by UCCS and nearby university faculty members as well as leading film experts. This year’s festival continues the tradition of free public screenings designed to reach a broad segment of the Front Range community to reinforce the university’s commitment to institutional collaboration, community outreach and the promotion of diversity, according to Carole Woodall, assistant professor, History Department and Women’s and Ethnic Studies Program, and IFF executive curator. This year’s festival explores the theme of displacement due to economic need, war, imprisonment, and occupation. The post-screening discussions include a “talk-back”-style format with two or more discussants offering different perspectives. The uniqueness of this discussion in an academic/public forum is a testament to the Intersections Film Festival’s dedication to creating a dynamic context for fostering a discussion of Middle East-related global issues and their relevance at the local level.

IFF received a dollar-for-dollar matching grant from The Gay & Lesbian Fund for Colorado. Go to the IFF website to become an IFF supporter.

The schedule of events for the 2011 Intersections Film Festival follows:

6:30 p.m., showing of “Amreeka,” (U.S./Canada, 2009) by Cherien Dabis. Raphael Sassower, professor, Philosophy Department, will be one of the post-screening discussants.