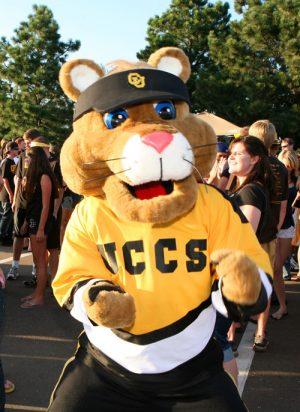 Editor’s Note: This is the first in an occasional series of features outlining the history of UCCS athletics and the mascots that have represented the campus.

Whether it’s the artistic logo on UCCS shuttles, photos on uccs.edu, the marble statue in the University Center Plaza, or Boomer igniting the crowd at games and campus events, the mountain lion is an integral part of campus life.

But how did the mountain lion become part of UCCS’ fiber?

It all started in 1998 when the Student Government Association established a suggestion box to choose a mascot. The suggestions received were a golden eagle; a prospector; and, overwhelmingly, a mountain lion. Student Co-Executive Michelle McWhinney explained, “UCCS students approved the mountain lion in spring, 1998, and a committee worked with graphic designers to make sure the UCCS representation of a mountain lion was unique, and didn’t look like any other copyrighted designs.”

Since that time, the mountain lion has been the UCCS symbol. Boomer, the costumed mascot that appears at athletic events, arrived a couple of years later. Minutes of an Oct. 2003 regents meeting refer to the introduction of Boomer and then-UCCS Athletic Director Randy Cubero saying that student government and athletics share the costs and profits related to the mascot. Boomer was officially introduced at Fall Fest Oct. 4, 2003 and is fast approaching its sixth birthday.

The mountain lion, the mountain lion logo, and Boomer are all officially adopted symbols for UCCS and are here to stay. But the path to a copyright-protected name for UCCS athletic teams was not always so clear. In future segments, we will look back at the university’s mascots and their selection process. To share personal recollections, contact Ron Fitz, rfitz@uccs.edu