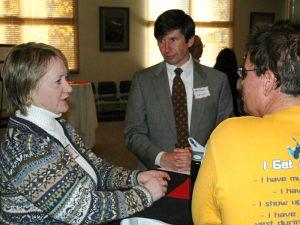 The carpet, dim lights and hors d’oeuvres were all part of efforts by the Office of Sponsored Programs to recognize efforts to bring grant funds to the campus, efforts that are particularly important as UCCS explores ways to diversify its budget.

The fete was the idea of Gwen Gennaro, director, Office of Sponsored Programs, and David Schmidt, professor emeritus. It is now an annual event for faculty members who submit proposals, have active sponsored programs, and new faculty.

“Sir Arthur Clarke, the British science fiction author and futurist established what he called his first law,” Peg Bacon, provost, told the more than 100 faculty and administrators in attendance. “That law goes like this ‘When a distinguished but elderly scientist states that something is possible, he is almost certainly right. When he states that something is impossible, he is very probably wrong.’ Today we are celebrating some distinguished researchers who believed in the possible.” 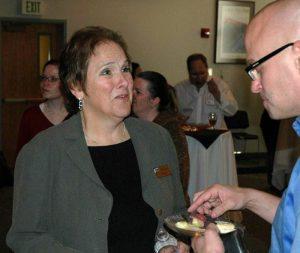 Bacon, Chancellor Pam Shockley-Zalabak, and Michael Larson, associate vice chancellor for research and innovation, heaped praise on faculty who had received grant funds as well as those whose applications were not funded.

“In the last ten years, our extramural funding has grown from three million to over nine million dollars annually,” Larson said. “In addition to this substantial increase in funding, the number of faculty submitting proposals for external funding has grown 40 percent.”

Shockley-Zalabak added that UCCS researchers also excel in the classroom as teachers and are committed to creating the next generation of explorers.