The University of Colorado Board of Regents approved April 7 a 2.5 percent base-building salary increase for employees on its four campuses as part of the fiscal year 2017-18 budget, which begins July 1.

The compensation increase matches the mandatory state increase for classified personnel, a 1.75 percent across-the-board increase with an additional 0.75 percent in merit pay increases. 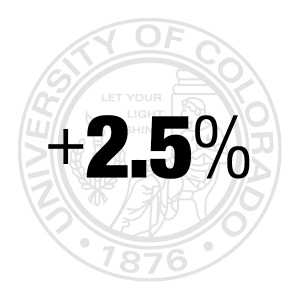 The board’s approval came in an 8-0 vote, with an abstention by Regent Jack Kroll, who is a staff member at CU Boulder.

The increases are more than those in the 2016-17 budget, in which employees at CU Boulder, CU Colorado Springs and CU Anschutz Medical Campus received a 2 percent increase and system employees received a 1.77 percent increase. CU Denver employees were not given base-building salary increases in 2016-17 because of the university’s budget shortfall, however they were given an up to 2 percent non-base-building increase divvied up at the discretion of the department leadership.

CU Denver is now estimating it might be $3.4 million above budgeted revenue in FY 2016-17 because of higher-than-expected enrollment growth and an increase in indirect cost reimbursement. Regent Jack Kroll, D-Denver, asked whether it would be possible to use some of that money to make up for the past fiscal year’s salary shortfall.

Chancellor Dorothy Horrell said it would not. CU Denver does not intend to expend the funds in FY 2016-17 and will wait until actuals are known, she said. “The budget was very conservative and not sustainable.”

Todd Saliman, vice president and chief financial officer, said the increases as approved would add more than $23.3 million to the university’s 2017-18 budget. The final budget will be voted on at the board’s June meeting at UCCS.