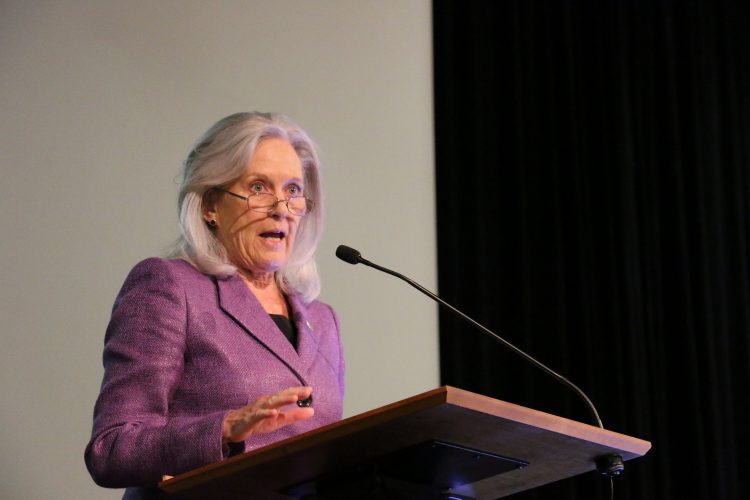 Regent Linda Shoemaker was the keynote speaker at a CU Women Succeeding Conference at UCCS March 3.

Women leaders were encouraged to be involved in their university, community or church and to spread the word about the importance of higher education during a March 3 CU Women Succeeding Symposium at UCCS.

Regent Linda Shoemaker, D-Boulder, delivered an opening keynote address at the daylong symposium that attracted about 200 women from all four CU campuses. The event featured workshops, lectures and presentations that ranged from personal reflections on pursuit of a doctoral degree to discussions of Title IX.

A self-described aging hippie, feminist, environmentalist, activist and patriot, Shoemaker called the nine-member CU Board of Regents as a group united in support of the university. She complimented the group’s decision to engage in public service and to join forces to “put the public back in public higher education.”

“I urge you to get involved anywhere,” Shoemaker said. “Get involved in your schools, your children’s schools, your churches, your neighborhood. We need to hear women’s voices today stronger than we ever have. Be a pest. Be persistent. Get more active.”

Increasing public support for higher education is a priority for Shoemaker. She enlisted the crowd to join her in spreading the word about the importance of education and making sure tuition is within reach.

“Higher education in Colorado has been pretty well privatized,” Shoemaker said. “What can we do about that today?”

She said the Regents should be leaders in spreading the word about the importance of a high quality public higher education. But, she added, the Regents cannot work alone.

“Everyone in this room can help the public understand CU’s importance,” Shoemaker said. “Have faith in higher ed. Speak out to your friends and family. Talk about the 5 percent funding issue, pay attention to the state legislators when they talk about esoteric boring subjects like reclassifying the hospital provider fee or reforming the state tax system. Both of those would help us. Support any increase to the state general fund.”

1 Comment on Regent: Be a pest, get active in supporting CU