Rhonda Goodman-Gaghan made a wish list when she began looking for a job after she and her husband moved to Colorado.

Imagine her delight when her husband found a posting for the curator position at the UCCS Heller Center for Arts & Humanities.

“When I saw the job description, I thought ‘Oh my god, this is the job I’ve been looking for,” she said. “This job bridges my entire job history.”

Goodman-Gaghan started as Heller curator in January. Her time is split between Columbine Hall, where she keeps an office, and the center, where she’s learning every nook and cranny of what used to be the home, studio and ranch of Larry and Dorothy Heller. 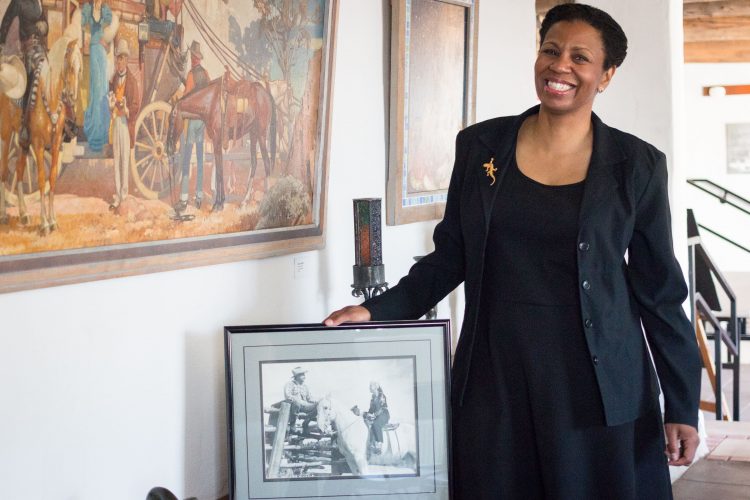 Virtually every entry on Goodman-Gaghan’s resume prepared her for this position: newspaper reporter at the Philadelphia Inquirer; development assistant at the World Affairs Council in Philadelphia; director of education at two historic houses in Virginia owned by the National Trust for Historic Preservation, including a Frank Lloyd Wright house; master’s degree in history from Villanova University; a second master’s degree in American material culture from the Winterthur program in conjunction with the University of Delaware; coursework and research toward a doctorate in art history at Stanford University;  volunteer at the Sangre de Cristo Art Centers and Conference Center in Pueblo, working with the collection of Taos artist Gene Kloss.

At Heller, Goodman-Gaghan’s mission is two-fold: to organize, catalog and curate the vast collection, and to bring a regional face to the center.

Goodman-Gaghan estimates that the Heller collection encompasses at least 2,000 pieces –  photographs, works on paper, paintings, sculpture, furniture, books, sketchbooks, records, cassette tapes, housewares and more. Some of the collection is housed at Heller, some on the main campus, some in the warehouse at the UCCS building on North Nevada Avenue. The collection has been cataloged sporadically over the years, but not in a comprehensive or complete way.

As for raising the visibility of the center, Goodman-Gaghan has already made connections in the local community, met with the Heller community advisory board and plans to soon release a summer schedule of events and activities.

She’s especially getting to know the Hellers, the colorful couple whose legacy lives on through the building, programming and collection left to UCCS in 1996.

What is now the Heller Center was their home, built by hand from the materials of the area and expanded as the Hellers added new structures, Goodman-Gaghan said. The design was meant to mimic the nearby rock outcropping in what the Hellers called “Yawn Valley.”

“This home looks like it belongs here,” Goodman-Gaghan said.

The center is used for events, and visiting artists use the studio. It also very much retains the feeling of a home, with artwork on the walls and items tucked on shelves in the hand-dug basement.

As Goodman-Gaghan slowly learns the history of the home and the Hellers, those entries on her resume frequently come into play – time at historic homes, research and coursework on American materials, even work in development. She recently discovered yet another interesting link to the Hellers. Both she and Larry Heller attended Williams College. Heller graduated in 1927, Goodman-Gaghan in 1993.

“I’m having a good time,” she said recently, sitting near a Larry Heller painting at the center. “It’s a little overwhelming at first on many levels. But how can I complain?”

ABOUT THE HELLER CENTER 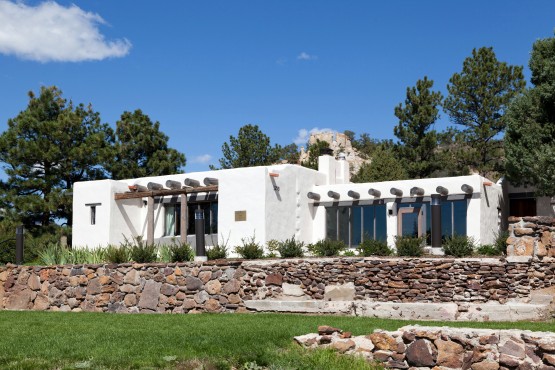 The Heller Center is the former home of Larry and Dorothy Heller. Larry Heller hailed from a wealthy Pennsylvania family, and his wife is recognized as the first woman on the Colorado Springs police force.  They moved to what they called “Yawn Valley” in the Eagle Rock area of Colorado Springs and, in the 1930s, began digging adobe for construction of the house, according to the Heller Center web site.

The Hellers designed and built what would become the main house and a guest house during the next decade. They later added a studio, gallery and foundry. Throughout the 1930s-50s, they hosted artist gatherings on the property, even as Larry Heller painted and made sculpture and propaganda posters for the Army Air Corps, among others.

Larry Heller died in 1983, and Dorothy continue to live on the property until her death in 1999. In 1996, she donated it to UCCS on the condition that it be used for arts and humanities education.