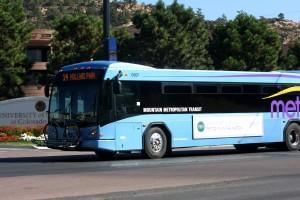 Bus service to UCCS by Mountain Metropolitan Transit will continue as scheduled until May 1, when a series of summertime moves will result in changes to bus stops on campus.

Mountain Metro service to UCCS has been a source of discussion and negotiation since last month, when the city owned bus service proposed changing service to the campus and eliminating the stop on the main campus at Centennial Hall.

Now, after talks between UCCS and Mountain Metro, officials have announced this multi-step plan:

Mountain Metro proposed moving the Centennial stop as part of a broader set of changes announced earlier this year. The changes were aimed at increasing bus frequency across the transit system.  But the bus service changed its proposal after more than 30 people attended a Mountain Metro meeting on campus last month.