A UCCS alumnus recognized as one of the nation’s great poets will deliver the fall UCCS commencement address during Dec. 18 ceremonies at the Broadmoor World Arena.

Yusef Komunyakaa, 68, of New York City, will share his personal story as well as thoughts about discovering one’s creative voice with an estimated 475 students and their families during the 2 p.m. ceremony. Komunyakaa graduated from UCCS in 1975, following his service in the U.S. Army where he was a correspondent and managing editor of the Southern Cross, the biweekly newspaper of the 23rd Infantry Division. He was awarded the Bronze Star Medal for his service.

“Yusef Komunyakaa is an example of the kind of success that UCCS can make possible,” Chancellor Pam Shockley-Zalabak said. “He built on his life experiences growing up in Louisiana during the Civil Rights movement and the Vietnam War and has created a legacy of work that makes him a national treasure. I am honored that he is returning to UCCS and will share his story with today’s graduates.”

Komunyakka will join Shockley-Zalabak, CU President Bruce Benson and members of the CU Board of Regents in congratulating graduates and in the formal conferring of degrees for students who completed requirements for bachelor’s master’s or doctoral degrees in August or December. About 850 students completed the requirements and will earn degrees. UCCS also conducts spring commencement ceremonies in May. In 1996, the CU Board of Regents awarded Komunyakka an honorary doctorate of humane letters degree. 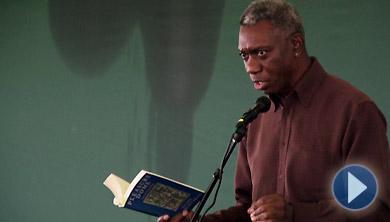 At 4:30 p.m. Dec. 17 on the third floor of the University Center, there will be a public reception for Komunyakaa and book signing of “Neon Vernacular: New and Selected Poems 1977-1989” will be available. The book won the 1994 Pulitzer Prize in Poetry. A public reading is scheduled for 5:30 p.m.

Komunyakaa, now global professor of English at New York University, began writing poetry in 1973. His first book of poems, “Dedications & Other Darkhorses,”was published in 1977, followed by “Lost in the Bonewheel Factory” in 1979.

Komunyakaa first received wide recognition following the 1984 publication of “Copacetic,” a collection of poems built from colloquial speech which demonstrated his incorporation of jazz influences. He followed the book with two others: “I Apologize for the Eyes in My Head,” winner of the San Francisco Poetry Center Award, and “Dien Cai Dau,” which won The Dark Room Poetry Prize and has been as being among the best writing on the war in Vietnam.

He has published several books of poems including “The Emperor of Water Clocks,” “The Chameleon Couch,” ” Warhorses,” “Taboo: The Wishbone Trilogy, Part 1,” “Pleasure Dome: New & Collected Poems, 1975-1999,” “Talking Dirty to the Gods,” and “Thieves of Paradise,” which was a finalist for the National Book Critics Circle Award.

His prose is collected in “Blues Notes: Essays, Interviews & Commentaries.” He also co-edited “The Jazz Poetry Anthology,” co-translated “The Insomnia of Fire” by Nguyen Quang Thieu and served as guest editor for “The Best of American Poetry 2003.”

He has also written dramatic works, including “Gilgamesh: A Verse Play” and “Slip Knot,” a libretto in collaboration with composer T. J. Anderson and commissioned by Northwestern University.

Komunyakaa is the recipient of the 2011 Wallace Stevens Award. His other honors include the Ruth Lilly Poetry Prize, the William Faulkner Prize from the Université de Rennes, the Thomas Forcade Award, the Hanes Poetry Prize, fellowships from the Fine Arts Work Center in Provincetown, the Louisiana Arts Council, and the National Endowment for the Arts.

He was elected a chancellor of the Academy of American Poets in 1999. Before joining the NYU faculty, he taught at University of New Orleans, Indiana University, and as a professor in the Council of Humanities and Creative Writing Program at Princeton University.