Shockley-Zalabak and Susan Szpyrka, vice chancellor, Administration and Finance, shared a recent analysis of various higher education cost factors across the four-campus CU System at the October monthly forum in the University Center Theater. The analysis showed that employee wages have not kept pace with inflation, ratios of faculty and staff to students have stayed roughly the same, state support as a percentage of the total budget has declined and enrollment in high-cost programs such as science, technology, engineering and math has increased. The data were compiled by the CU System and was previously shared with the CU Board of Regents.

Those trends, particularly for state support, are not likely to change.

“We need to be well aware of the financial backbone of the university,” Shockley-Zalabak said. “While I absolutely believe the citizens of Colorado and the State of Colorado should be funding higher education at a much more robust level than they are, right now with these multiple constraints in our Constitution, even with a recovering economy, it is literally not possible.” 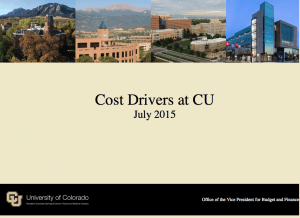 Szpyrka detailed the university’s growth in enrollment, declines in state support, relatively constant proportional levels of employees and employee salaries and fast-growing employee benefit expenses. Szpyrka stressed that expenditures at UCCS have increased in the last four years but the change is the result of growth in student enrollment and not related to spending above inflation. The analysis, available at https://www.cu.edu/cost-drivers-cu  allows comparisons between CU campuses. Its preparation was led by Todd Saliman, vice president, Budget and Finance, CU System.

In coming weeks, Shockley-Zalabak, Szpyrka and Terry Schwartz, interim provost, will meet with deans and department directors to begin discussing details of a new retrospective budget allocation process and describe new pro formas designed to invest in supporting fast-growing programs. Reallocations will be part of those discussions. Once a new process has been established, Shockley-Zalabak promised to share details in a campus forum.

“Would you believe we have the lowest – the most favorable — faculty to student ratio in the CU System?” Shockley-Zalabak asked. “It is true. What that indicates is that we have to be more focused on distribution on where the hires have been made. We have capacity in some areas. We need who we have but we have not distributed all of our resources where the growth has been.”

The next forum is scheduled for noon Nov. 30 and will feature Venkat Reddy, dean, College of Business, and associate vice chancellor for online education and initiatives, Academic Affairs. He will provide an update on online education efforts.