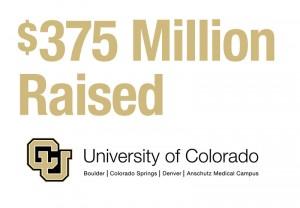 Private contributions to the University of Colorado increased more than 19 percent during the fiscal year ending June 30, setting a new one-year record of more than $375.4 million in support from individuals, foundations and corporations.

This preliminary figure, which includes funds given through both the University of Colorado Foundation and the university, marks the sixth consecutive year in which CU has exceeded the previous year’s total, and the fifth-straight record-breaking year. Gifts came from more than 52,000 individuals, foundations and corporations to support student scholarships, facilities, research and more on CU’s four campuses.

“We appreciate the commitment and investment of our many donors and friends, which makes the University of Colorado a stronger university,” said CU President Bruce D. Benson. “We’ve made significant progress by setting private support records in each of the past six years, but we still have a ways to go to be where we need to be, which is at levels comparable to the top public universities in the country.”

That $375.4 million total broken down by campus includes:

Examples of the impact of private support at CU this past year include:

UCCS: $1.5 million in support has been contributed by donors such as the JPMorgan Chase Foundation, the Anschutz Foundation, and the Herbst Family Foundation to fund campus initiatives to help military and veteran students graduate college successfully by providing academic and career assessments, tutoring, mental health resources, financial aid, peer mentoring and more.

CU Anschutz Medical Campus: The Colorado Health Foundation committed more than $5 million in grants to partnerships including ECHO (Extension for Community Health Outcomes) Colorado, which strives to improve primary health care and public health programs in underserved areas of the state, and the Denver-area program Creating a Culture of Wellness in Preschools, which aims to curb obesity through exercise and healthy eating.

University of Colorado Boulder: A $6 million estate gift from an alumnus funded two endowed faculty chairs—one in economics and one in Baroque music—and created a travel sabbatical program for undergraduates. Also, a $500,000 gift from an anonymous donor established a professorship and program in Israel/Palestine Studies, the first of its kind in the country, to enhance the study and discussion of this region’s culture, history and politics.

University of Colorado Denver: $2 million in commitments from a CU architecture alumnus has enabled the expansion and extension of an international exchange program between students from the College of Architecture and Planning and Dar Al-Hekma University in Saudi Arabia.

CU also benefited this year from the largest real estate donation in the university’s 139-year history: a gift of The Wildlife Experience facility from the family of Dave and Gail Liniger, valued at nearly $40 million. The commitment allows the university to substantially expand its new CU South Denver presence. Additionally, the Helen K. and Arthur E. Johnson Foundation collectively donated $18 million to CU: $8 million to support nursing faculty at UCCS, and $10 million to fund mental health programs at CU Anschutz.

“The University of Colorado is one of our state’s most important public institutions, and we are grateful that our donors see the value of the university by investing in their passions in a tangible way, be it creating new scholarships for student-athletes, developing innovative treatments for trauma survivors, or improving cybersecurity,” said Jack Finlaw, CU Foundation president and CEO.

This is the second year under the new CU Advancement structure, which shifted fundraisers and support staff from the University of Colorado Foundation to the university to better align fundraising activities with strategic university priorities. The CU Foundation continues to manage and account for existing gift funds and thousands of endowment accounts and other investments for the university.