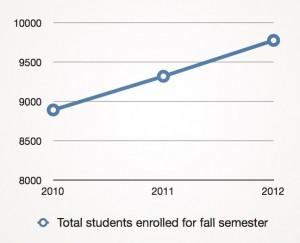 It’s official. Student enrollment at UCCS for the Fall 2012 semester is the highest in the university’s history with 9,777 students enrolled in 113,481 credit hours.

“A lot of people did a tremendous amount of work reflected in this report,” Wesley said. “I am appreciative of everyone’s efforts to recruit, retain, and — perhaps most importantly — to graduate students.”

For information on enrollment at other CU campuses, visit http://connections.cu.edu/news/student-enrollment-strong-steady-across-cu-campuses/