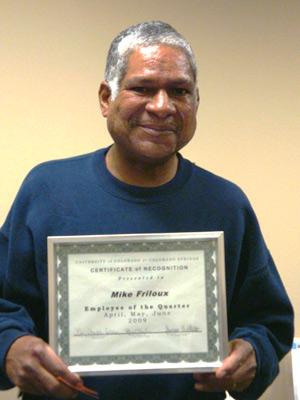 Mike Friloux of Facilities Services earned Employee of the Quarter honors this term.

His qualifications include singing while cleaning bathrooms, encountering cantankerous wildlife, and taming a flaming vacuum cleaner, according to his nomination form. But while these activities are “above and beyond the call of duty” examples, this member of the custodial crew does his job in Dwire Hall with a spirit and commitment noticed by personnel in School of Public Affairs. Mary Lou Kartis, assistant to the dean, and Terry Schwartz, associate dean, submitted his nomination.

“Mike takes the time to share a friendly greeting and smile with everyone he meets,” said Kartis. “Regardless of what’s on his list of things to do each day, Mike tackles each assignment with efficiency and quality. He has a deep understanding of what quality work means; Mike’s simply the best. These ideas and thoughts aren’t from one single person here in SPA; the entire School of Public Affairs feels this way about Mike.”

According to the nomination form, Friloux has served as a custodian at UCCS for several years, since retiring from the military. “He deals with messes, moves, and changes to his schedule and duties all in stride and with a smile,” the description states. “He goes out of his way to make sure things are clean and looking good,” taking his responsibilities seriously.

“It’s not uncommon,” the tribute continues, “to see Mike helping students find classrooms in Dwire Hall or a particular faculty or staff member’s office. He doesn’t just point the way; he personally escorts students to our office and makes introductions before he leaves.”

Friloux’s special qualifications for nomination include singing every day while performing his duties, being chased by raccoons, and even seeing a growling bear when emptying trash early one morning. He laughed off being “caught on fire” when a defective vacuum cleaner shorted out, repairing it and resuming work the next day.

Remaining “upbeat, day after day,” performing tasks that are unpleasant, usually unnoticed, and “absolutely necessary,” Friloux’s outlook, dedication and service earned him his nomination and ultimately his Employee of the Quarter award.