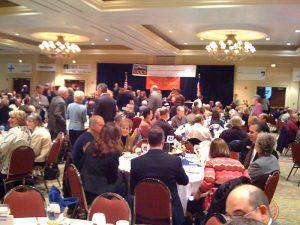 Colorado Springs’ economy is in recovery and in better shape than the U.S. as a whole, according to College of Business faculty who presented at a downtown hotel ballroom packed with community leaders this morning.

Tom Zwirlein, professor, Business, and Fred Crowley, senior instructor, College of Business, gave the state of the local economy this morning as part of the 13th Annual Southern Colorado Economic Forum at the Antler’s Hotel.

“Stability came strictly for one reason, presence of the military,” Crowley said. “The military is responsible for 100,000 jobs in a community where we have 330,000 people actually employed. That’s an incredible impact on our community.” 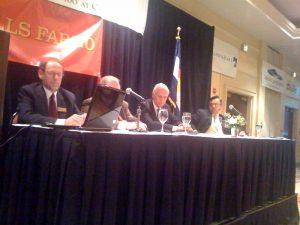 “One of every five dollars in this community is generated through the military.”

Clearly, Colorado Springs is in recovery, Crowley said, pointing to multiple data sources including unemployment numbers that are more than two percentage points better than the national average and the local economy is up 12 percent as compared to a year ago.

“This is not going to be a rapid recovery,” Crowley said. “But be a recovery that we hope is without a double dip.” But not all the numbers presented were rosy. 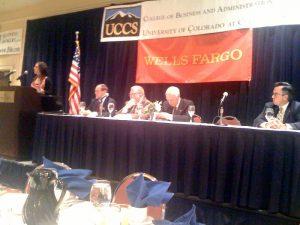 Crowley and Zwirlein both pointed to declining sales taxes revenues as a substantial problem for local government which depends on such taxes to fund municipal services. The growth of Internet sales, construction of retail stores in Falcon, Monument and Fountain and general consumer malaise have caused large drops in revenue for the City of Colorado Springs. Sales and property taxes lost to suburban communities cost the City of Colorado Springs and estimated $32 million in revenue.

“I promise to spend more money,” Crowley encouraged the crowd to pledge, “in Colorado Springs.”

Zwirlein said concerns remain about the ability of the U.S. economy to recover. Topping his list are commercial loan defaults, what he called a “one-legged stool” of municipal financing and mistrust of government.

“Things are improving but there are some blocks along the way where we could stub our toes,” Zwirlein said.

To see more about the local economy, read the complete brochure from the forum.