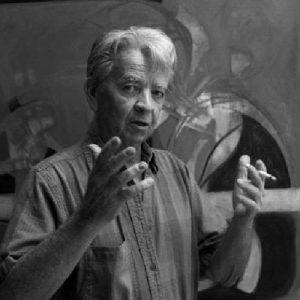 The following appeared in the Colorado Springs Gazette:

Although Al Wynne hadn’t been able to talk much since cancer took his larynx in 2003, his canvases still spoke loudly.

In color, in muscular brushstrokes, in calligraphic gestures and oblique forms.

“Balancing intuition and formal classical training, emotion and intellect, Al Wynne has painted in grand gestures and more modest dashes and splatters of paint for more than 60 years,” wrote the Christian Science Monitor in 1993, “a life in art spent outside the mainstream of the market place, but deeply involved with his own advancing aesthetics. His paintings are often rich and warm, muscular and demanding, or insistently provocative and searching.”

Born in the Springs in 1922, Wynne studied art with the best of the best — artists such as Boardman Robinson and Vance Kirkland.

Besides being adroit in many different media, he was a facile thinker, friends say, and was an animated conversationalist. Lou Wynne calls him practical and tenacious.

“I guess when I think of him during the early years, I think of that big smile on his face and a lock almost black hair hanging over his forehead,” she says. “He talked a lot.”

Wynne was also a teacher. After a stint flying B-25’s during World War II, he taught briefly at Colorado College. Wynne eventually established the UCCS’ art department. In the early years, the classes were taught in his home and studio. Al and Lou Wynne, who is a noted ceramicist, also taught private lessons there, forming friendships that lasted a lifetime.

“Living out in the Forest does separate you and Al was fairly reclusive, especially as he got away from teaching” says his wife of the years, starting in the ‘70s, he stopped teaching to focus on his work.

He exhibited nationally and has been listed in “Who’s Who in American Art” since 1959. Although he explored abstract expressionism as A-List New York painters did the same, Wynne was a Colorado painter: Wynne is widely acknowledge as one of the most important abstract painters in the region. In recent years, his work has surfaced in several surveys of influential Colorado artists, including the Museum of Contemporary Art’s “5 Abstract” in 2002 and the Fine Arts Center’s February exhibition, “Colorado Springs Abstract.” In 2008, Denver painter Tracy Felix and Hugh Grant, director of The Kirkland Museum of Fine and Decorative Art, curated Wynne’s only major retrospective for the Kirkland and later, the Fort Collin Museum of Contemporary Art.

“He did abstract painting, of course, but he had an abstract mind as well,” said Grant, who got to know him after creating the Kirkland in 2003. “He loved classical music, which we discussed all the time. He loved the Shostakovich 10, but hadn’t heard the 11th. So, on my last visit about a month ago, we sat and listened to the 11th symphony. That was quite amazing.”