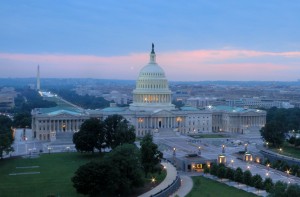 The trip was part of Brown’s “Icons of the American Republic” class, which introduces students to the founding period of the United States through the events, concepts and individuals depicted in art exhibited in the U.S. Capitol Building. The five UCCS students and 21 Boulder students also got a rare opportunity to visit the floors of both the U.S. House and U.S. Senate.

This is the third consecutive year Brown has led students on the visit to Washington. The class trip is made possible by financial contributions from external donors.

The five UCCS students are enrolled in an independent study course led by Jim Null, professor, Political Science. The students will write a paper about their experience as part of the course requirements.

Null called the experience of having someone with Hank Brown’s experience lead a tour of the Capitol a “once in a lifetime” experience.

“This is a remarkable opportunity for our students,” Null said. “They learn about the American experiment in national self-governance in the heart of the government itself from someone who has been an influential participant in that experiment.”

Brown has 30 years of public policy experience as a legislator, congressman, U.S. senator, and higher education executive. He served in the U.S. House of Representatives from 1981 to 1991 and in the U.S. Senate from 1991 to 1997.

He retired from the CU-Boulder faculty last year, but continues to teach the Icons of the Republic course through.  He served as president of the University of Colorado from 2005 to 2008.

The UCCS students who traveled to Washington, their hometown and year at UCCS are: