UCCS Chancellor Pam Shockley-Zalabak and Cliff Richardson, interim president, PPCC, gave overviews of their respective campuses Wednesday to guests of the UCCS-based Center for the Study of Government and the Individual meeting at the Antlers Hotel.

The leaders intermixed points of pride about new programs, cooperation between the campuses, spiraling enrollments, success with low-income, minority and adult students with concerns about funding.

“All of us, based on Senate Bill 3, are having to submit this month to the Joint Budget Committee a 50 percent reduction in our state appropriation from previous years,” Shockley-Zalabak said. “Now, when this downturn started, UCCS had $24 million from the State of Colorado. We are estimating anywhere — if cuts are proportional across governing boards — $8-9 million next year, July 1. That is real dollars, not adjusted for inflation. Cliff showed you very similar things for the community college system.”

Shockley-Zalabak highlighted cost-saving efforts at UCCS including no salary increases for two years, increased PERA contributions, and both operating and personnel reductions. She also provided comparisons to similar universities that UCCS operates with 50 percent fewer staff and has expenditures that are 21 percent less per student.

“By any measure, we are both efficient and effective,” Shockley said in response to an audience question.

Shockley-Zalabak highlighted personal benefits of education ranging from increased levels of employment and lower rates of incarceration to broader benefits including 95,500 jobs contributing $4.25 billion in wages, $387 million in taxes and spin offs to other businesses and industries. The statistics tracing 40 years of Colorado fiscal policy history were assembled by Brian Burnett, vice chancellor, Administration and Finance, as part of his doctoral dissertation.

“Each dollar invested in higher education generates 97 cents in wages and salaries for employees in other industries” Shockley-Zalabak said before highlighting UCCS faculty research ranging from physics with the Department of Defense to battery controls with General Motors and helping certify rural Colorado nurses.

Shockley-Zalabak called on those in attendance to encourage newly elected leaders to examine state education investments and to ensure affordability for post-secondary education. By investing, Colorado can reduce regional, income and ethnic gaps in college attendance, she said. 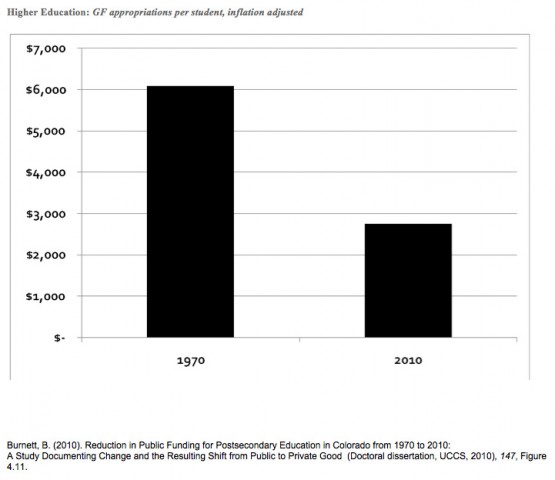