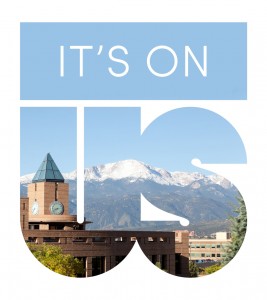 UCCS is joining with more than 200 universities and the White House in an effort to eradicate sexual assaults on campuses across the nation.

The “It’s On Us” campaign shifts the way sexual assaults are viewed on university and college campuses and aims to get more men and bystanders involved in sexual violence prevention efforts.

According to Julia Paris, discrimination and harassment officer and Title IX coordinator, the goal of the campaign is to present the issue of sexual assault as  something that can affect anyone and something that everyone can help prevent.

“In the past, sexual assault has been seen as primarily a women’s issue, but it’s time we talk about things differently,” Paris said. “This movement is designed to mobilize student and university communities to create an environment in which sexual assault is unacceptable and survivors are supported. In the coming months, UCCS will be encouraging students to take the pledge and join in campus events designed to increase awareness around sexual assault.”