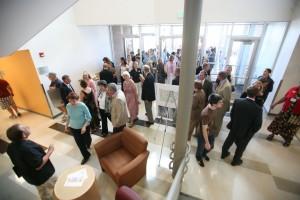 Brian Burnett, vice chancellor, Administration and Finance, was master of ceremonies for the re-dedication event. He said the naming of Centennial Hall serves two purposes. It reduces the confusion between a “Science Building” and a “Science and Engineering Building” and honors the state of Colorado.

Continuing, he identified and thanked the various individuals who played a part in making the “important milestone in UCCS’ development.” He welcomed Kyle Hybl, chairman of the CU Board of Regents, and Cary Kennedy, Colorado state treasurer, as special guest speakers. 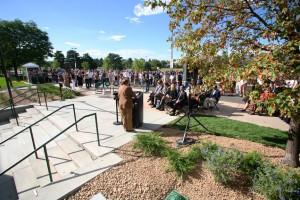 Hybl spoke of the importance of Centennial Hall in the continued growth and development of UCCS. He said the state-of-the-art facilities will be a great asset to the campus. Kennedy praised the administrative strategies involved in carrying the project forward during harsh economic times. She was instrumental in securing the necessary financing and noted that the state paid for the renovation through certificates of participation with debt service from federal mineral lease grant funds.

Shockley-Zalabak said Centennial Hall is now the fourth Leadership in Energy and Environmental Design-certified building on campus. It follows the Recreation Center, the Science and Engineering Building, and the Gallogly Events Center in meeting LEED certification which recognizes environmentally friendly construction. On a more personal note, Shockley-Zalabak said she was anxious to use the new auditorium. 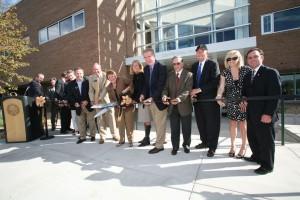 Concluding her speech, Shockley-Zalabak led the special campus guests in a ribbon-cutting ceremony. Burnett took the podium again to make closing remarks. He then invited the crowd of faculty, staff, students and well-wishers to inspect the building, via the organized tours or individually.

Once inside, visitors walked about and remarked about facilities that replaced old features. Many commented about the auditorium’s subdued colors in contrast to the room’s previous orange décor. Many noted the upper floor corridor lacked the clinging chemical smells that pervaded the air there for so many years. Others noticed that air conditioning made the interior comfortably cool. 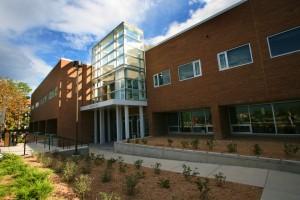 Tour guides showed the electronically enhanced lecture halls, teaching labs with audiovisual capabilities and work stations in some of the 14 research labs. They pointed out fume hoods and other lab equipment and enhancements specifically designed to serve the chemistry and biochemistry, anthropology and geography disciplines. Staff in the Science Learning Center, one of the Project EXCEL learning facilities, showed off the new reception desk, offices, greatly increased space in the main room and adjoining 32-station computer room. Staff presented flash drive souvenirs commemorating the dedication to visitors.

To see video of the event taken by Media Services and posted by Web Services, visit http://www.uccs.edu/~provost/convocation/sequence01video.html