Editor’s note: This is the second in a series of faculty profiles highlighting the diverse and innovative faculty at UCCS. 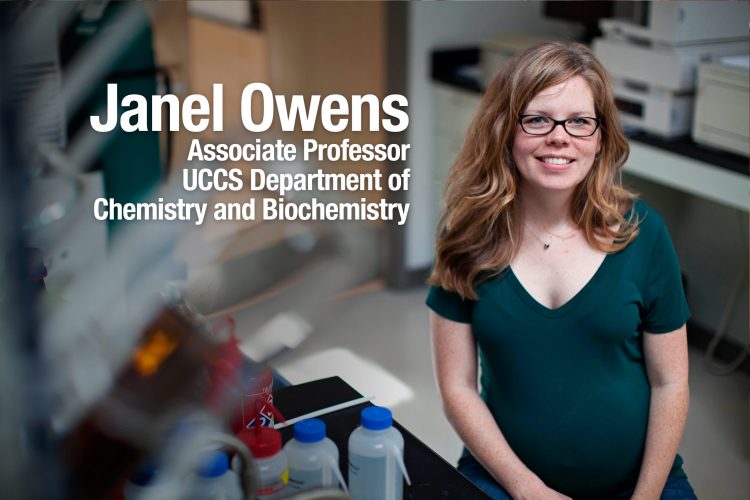 As an undergrad, Janel Owens traveled through the Scottish Highlands, trying whiskey for the first time on top of a castle. She looked to her friend while the tour guide poured it.

“We knew this was going to be really bad,” she said, “so we threw it back quickly.”

Her throat burned. She coughed and coughed. The tour guide shouted, “You’re supposed to sip it! You don’t throw it back like a shot!”

“She also keeps whiskey on hand at work — for research.”

In the 15 years since then, she never acquired a taste for whiskey, using it only to bake bread pudding and make hot toddies, as her Scottish grandmother suggested she do for colds.

She also keeps whiskey on hand at work — for research. Owens, 36, is an associate professor with the UCCS Department of Chemistry and Biochemistry, where she analyzes distilled spirits in the lab.

She breaks down the compounds, separating the flavor profiles. Some of the common organic compounds she finds are isoamyl acetate, a colorless liquid that smells and tastes like bananas, and benzaldehyde, which is used for almond flavoring. 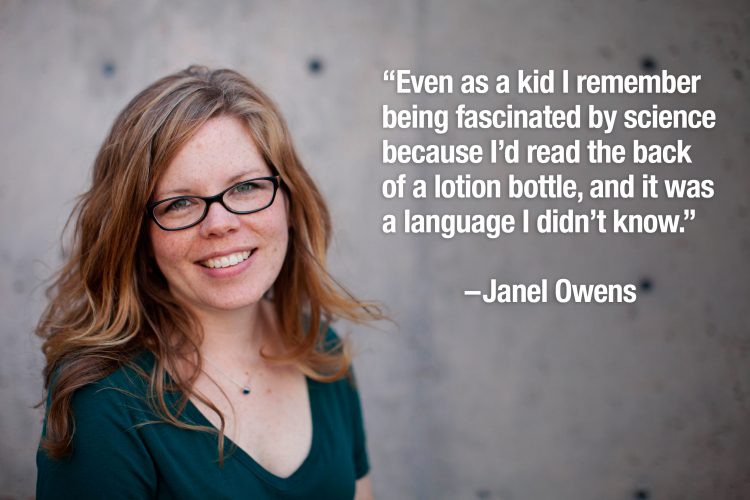 “I really love puzzles, so I think it’s part of that puzzle of figuring out what contributes to that sensory experience of tasting a beverage like that,” said Owens, who joined UCCS in 2009. “I have so much fun doing that, even though I don’t want to taste it.”

Owens is a certified whiskey chemist with the federal Alcohol and Tobacco Tax and Trade Bureau. She teaches courses in applied analytical chemistry, including environmental chemistry and forensic chemistry.

“Her classes are pretty popular,” said Allen Schoffstall, UCCS chemistry professor. “She’s very engaging. She knows how to put a talk together and make it interesting.”

“I was like this is cool, this is what I want to do with my life.”

Owens spent all of high school and nearly two years of college wanting to be a doctor, never mind that blood makes her squeamish and she fainted while watching an open-heart surgery as a medical research intern. She wanted to pair her love of science and math with helping others.

But halfway through her sophomore year, a chemistry research project sparked a new path. She analyzed canal water near the U.S.-Mexico border for environmental pollutants that may be contributing to blood disorders and birth defects among residents.

In graduate school at the University of California, Davis, she found being an introvert made it a bit terrifying to present her research findings. Until something clicked.

“What you are telling is a story. It’s a science story with a beginning, middle and end, and I’d always liked stories. Then it didn’t seem so scary,” said Owens, who received a PhD in agricultural and environmental chemistry.

Her research focuses on developing analytical methods for complex samples such as soil, urine, dust, fruit, water and brain tissue to measure trace chemicals, some of which are beneficial, while others are toxic. 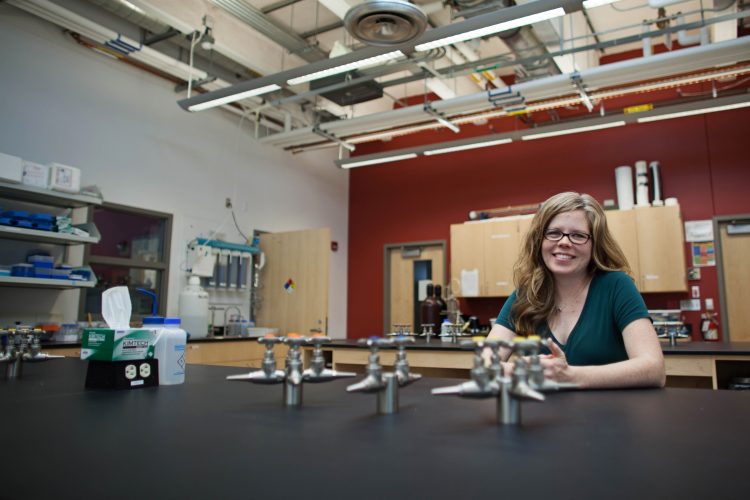 She’s taken part in roughly 20 presentations and 35 informational posters used at meetings or seminars. She has co-authored 17 peer-reviewed publications, with the most recent on whiskey analysis.

Owens knows chemistry can be daunting. When people hear she’s a chemist, they often say something such as, “Oh, I hated chemistry in high school!” But she shares with her students what helped her: tell a science story.

She recently met with a senior undergraduate student who was worried about not having enough for a 30-minute presentation on her research project. Once they mapped her story, the student realized she could easily fill that time with compelling details.

“What I really see myself as more than anything nowadays is a mentor, training the next generation of scientists,” Owens said. “So how cool is that, to be paid to work with young people who are excited about science?”

Read the first faculty profile in this series, about Tabby Farney, here:

Faculty profile: Being a librarian is about more than books for Tabby Farney