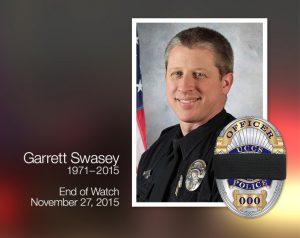 Garrett Swasey, the UCCS police officer who died Nov. 27, 2015 while responding to a shooting at a local Planned Parenthood facility, was awarded the campus police department’s top honor in an awards ceremony June 22.

Swasey was awarded the UCCS Police Medal of Valor and the Police Cross Award. His widow, Rachel Swasey, accepted the awards on his behalf along with his parents, Dave and Sheila Swasey.

The Medal of Valor is reserved for sworn officers who have performed acts of courage or heroism in which they risked their lives. The Police Cross is awarded to an officer who lost his or her life on duty.