As she walks across the stage in Broadmoor World Arena May 13, Horner’s four brothers and sisters – all University of Colorado Colorado Springs graduates –­ will be in the stands cheering her on. She’s the youngest of the Horner kids to graduate from UCCS, ending a run that began when Brian Horner graduated in 2002.

Laurie Horner’s siblings have already coached her on what to shout as she leaves the stage: “Horners out.”

Mountain Lion blood runs deep in the Horner family. After Brian Horner, now a physician at University Hospital in Utah, graduated in 2002, Kristy (Horner) Martinez followed in 2005. Martinez now works in urban planning and development for the City of Fountain.

Steve Horner earned both his bachelor’s and master’s degrees from UCCS (2008 and 2011, respectively) and now works as assistant director of Residence Life and Housing.

Katie (Horner) Harris is a UCCS academic adviser. She earned bachelor’s (2011) and master’s (2013) degrees from UCCS. And all but Kristy Horner met their future spouses at UCCS. They also are UCCS graduates.

“We all joke that I should get free tuition or have a building named after us,” Laurie Horner said. “But that hasn’t happened!”

Laurie Horner will graduate with a bachelor’s degree in mathematics and a certification in secondary education. She already has a job lined up teaching math at Jenkins Middle School this fall. She too has been a UCCS employee, working as a grader in the math department, an administrative assistant in Residence Life and Housing, at the Monarch residence hall front desk and as an orientation leader.

When she was considering colleges, Laurie Horner had a passing interest in Colorado Mesa University in Grand Junction. But she never really pursued it, or anywhere else, she said.

“I knew I was going to UCCS,” she said. “That was partly because of my siblings – they’ve all gone here. And I wanted to be close to my family.

Laurie Horner said her parents still live in Black Forest, where she grew up. They too will be in the stands at the World Arena on Friday.

Along with her decorated cap and gown, Laurie Horner will wear a new type of cord at commencement. UCCS Alumni & Friends Association introduced a legacy cord program this year for graduating students whose parent, spouse/partner, sibling and/or children are UCCS alumni. More than 150 students will wear the black, silver and gold cord.

And the whole Horner family plans to visit campus after commencement for photos and a tour. As Laurie Horner notes, a lot has changed since some of the older Horner siblings were here.

“It’s really exciting to be the last one here,” she said. “It’s been a good four years. I’m sad to leave.” 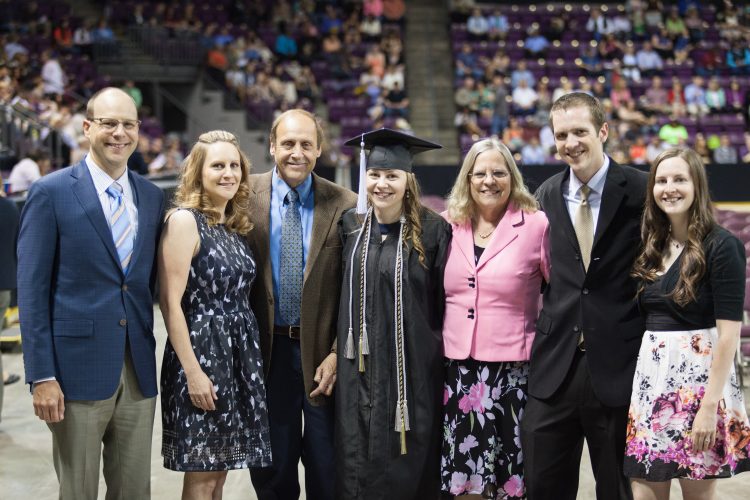 Spring commencement exercises are scheduled for 10:30 a.m. (College of Letters, Arts and Sciences) and 2:30 p.m. (Helen and Arthur E. Johnson Beth-El College of Nursing and Health Sciences, College of Business, School of Public Affairs, College of Education, College of Engineering and Applied Science) at the Broadmoor World Arena, 3185 Venetucci Blvd.

UCCS holds two commencement ceremonies to ensure that graduates can bring friends and family to the ceremony. Approximately 1,000 graduates are expected to participate. About 1,400 degrees will be awarded this spring, according to the Office of Admissions Services.

Kevin Kratt, president and founder, Kratt Commercial Properties, will be recognized with the University Medal by the CU Board of Regents during commencement. (Read more here: https://communique.uccs.edu/?p=23214)