Chancellor Pam Shockley-Zalabak announced the contributions at the university’s Golden and Growing reception celebrating the UCCS 50th anniversary. More than 250 donors and community supporters attended the event at Berger Hall.

“Business and foundation leaders, as well as individuals, have chosen to invest in the future,” Shockley-Zalabak said. “The future of this university and the Colorado Springs community are directly linked. We celebrate 50 years of success tonight while preparing for the next 50 years of excellence.”

The pledges signify a significant expansion of key UCCS arts, culture and health care programs in Colorado Springs. The expansion will provide increased visibility and opportunities for students throughout the Pikes Peak region as the university enters its second half-century. UCCS was formed in 1965 and will celebrate its golden anniversary with a series of events and activities throughout the year. 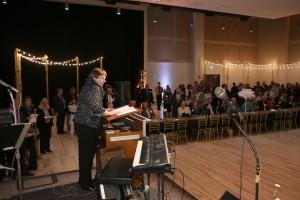 The pledges announced Wednesday include:

The design of the visual and performing arts center is led by H3 Hardy Collaboration Architecture, New York, with Semple Brown Design, Denver, serving as the architect of record. The center will be designed to encourage and support working relationships with cultural organizations in the community and to provide direct public access to performances, exhibits and classes. The new, integrated center will include a 750-seat main theater, a 250-seat recital hall, and the University’s 250-seat Dusty Loo Bon Vivant Theatre, home to the UCCS resident theater company, TheatreWorks, the Osborne Theatre, to be used by the theater and dance program, and the Gallery of Contemporary Art Education CenterGroundbreaking for the complex is planned for June with opening in Jan. 2018.