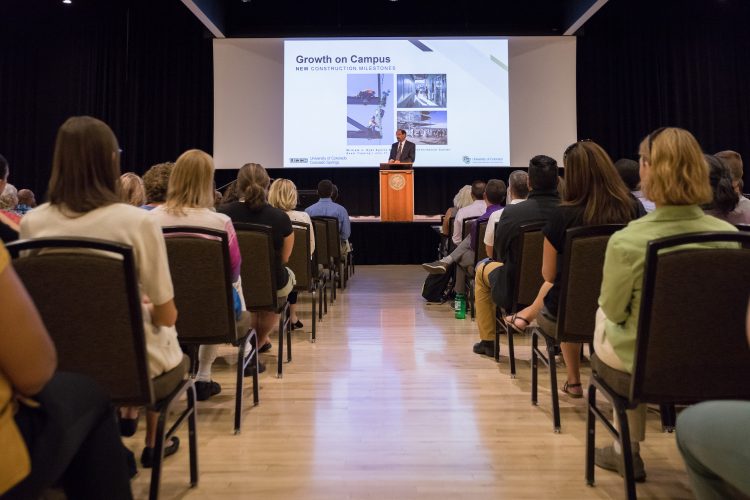 In his second State of the Campus address on September 18, Chancellor Venkat Reddy highlighted UCCS’ successes of the past year, including academic achievements, construction milestones, the growing diversity of the student body, increased retention rates and increases in the cumulative grade point averages of the incoming class.

He addressed challenges facing the campus, including the fall semester’s dip in enrollment. And he focused on what makes UCCS special: its people.

Reddy shared updates on changes made at the University of Colorado system level, including welcoming new system president Mark Kennedy. 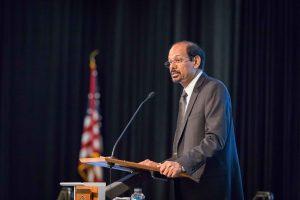 He also shared progress made at the campus level, including construction milestones on the William J. Hybl Sports Medicine and Performance Center – which has passed the halfway point on construction – and the new Spine Road, which was completed earlier this week and now connects the west and central points of campus.

Notable accomplishments of the past year included an R2 designation from the Carnegie Classification of Institutions of Higher Education, designating UCCS as a doctoral institution with a high level of research activity, new degree programs approved by the Board of Regents and the creation of the Human Physiology and Nutrition department, which will support the academic component of the Hybl Center.

With a focus on the campus community’s achievements of the past year, Reddy’s remarks recognized accomplishments made by each of UCCS’ colleges and by faculty, staff and students.

Among those individuals recognized were Meghan Lybecker, assistant professor of biology, who received a prestigious grant from the National Institutes of Health to study the bacterium that causes Lyme disease; David Havlick, professor of geography and environmental studies, who was quoted by over 500 media publications over the summer for his research on military-to-wildlife transition sites; and Sylvia Mendez and Valerie Martin Conley – associate professor and dean of education, respectively – who received a National Science Foundation grant to improve the pipeline for underrepresented minority scholars to pursue engineering faculty positions nationwide. 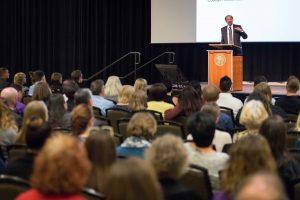 Reddy recognized the contributions of community partners to the campus, from establishing the UCCS downtown presence to beginning work on revitalizing the north Nevada Avenue corridor. And he celebrated the growing number of alumni legacy applications from individuals related to a UCCS alumnus, which numbered over 800 this year.

Reddy then addressed challenges the university will face in the future – most notably, this fall’s dip in enrollment, the first in over a decade.

“I want to be real with you,” Reddy said. “We are in complex and challenging times.”

“We want to continue to stay committed to access and affordability. We’re going to depend a lot on data analytics to figure out what happened. We’re also meeting with the deans and the enrollment task force we established to start finding solutions.”

In looking towards the future, Reddy said, “I want us to be systematic, thoughtful, use data and make the right calls.”

In closing, Reddy asked participants to consider their vision for UCCS in the region, in the state, in the nation and in the world, and highlighted that the involvement and commitment of each member of the campus community contributes to its continued success.

“We face challenges,” Reddy said. “But what’s going to keep us together, I truly believe, is our great culture.” 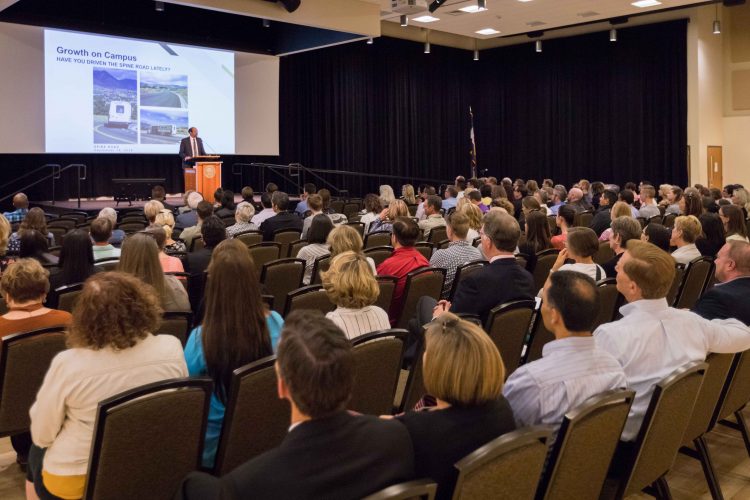