Two members of the Class of 1969 will return to their alma mater for their golden anniversary and join more than 1,000 graduating students during the 2019 Spring Commencement ceremonies May 17 at the Broadmoor World Arena.

The Office of Alumni Relations spoke with each of the two returning graduates about their memories of campus.

Linda Case – College of Education
Linda is a proud UCCS graduate of the class of 1969. Linda graduated from the College of Education with an emphasis on elementary education. She thanks the wonderful staff for all she was offered. Linda felt fortunate to have wonderful faculty from day one as many at the time worked at surrounding schools: CU Boulder, United States Air Force Academy and Colorado College. Linda was a very engaged member of the UCCS student body. She and fellow students worked tirelessly to gather toys for a student government-led Christmas party benefiting underprivileged children in the community. People were more than gracious to donate gifts, which had been donated by merchants in previous years. This party was held in the student lounge within the Colorado Springs Center on campus. Santa came out for the day as well, who some might have also known as assistant dean at the time, Dr. Richard P. Francis. Linda also stayed busy in between her studies with her involvement in the school’s newly started student newspaper. Stories like these are what Linda loves to reflect on and keeps her a proud alumna of UCCS today. 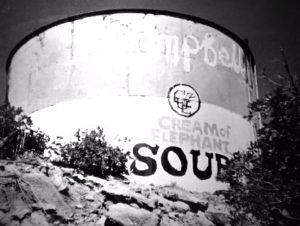 As Mark Swan reflects on his time at UCCS in the late 1960s, one of his favorite memories is his involvement in the infamous painting of the Cragmor Sanatorium water tank. A group of students painted the tank behind what is now Dwire Hall to look like a Campbell’s soup can labeled “Cream of Elephant.” Mark notes that he wasn’t one of the painters, but helped with transporting paint and supplies. Mark also recalls doing loudspeaker parameter measurements on the roof of Main Hall and having great fun with the engineering department’s first laser. He spoke about how at the time UCCS didn’t have an anechoic chamber, a room designed to completely absorb reflections of either sound or electromagnetic waves. Due to not having this room, their next best option was to orient loudspeakers “towards the heavens.” Mark stated, “This worked really well but the security police were not too happy with us.” Mark confessed to using the engineering laser at night with fellow students to chase passerby around the parking lot with the red dot. After testing their luck with Professor Hultquist and Matson, the two figured out pretty quickly what they were up to.

Mark met his wife at Denver Equipment, and they had two children. Mark now enjoys doing engineering consulting work as well as woodworking, skiing and camping.

As Mark is recognized as a Golden Graduate during the morning commencement ceremony, his son, Thaddeus, will earn his master’s degree in applied geography.